David, Solomon, and the Kings

THE PEOPLE DEMAND A KING

1 Sam. 7:4: So the sons of Israel removed the Baals and the Asherahs and served the Lord alone.

1 Sam. 8:7: They have rejected me from being king over them.

1 Sam. 9:14: As they came into the city, behold, Samuel was coming out toward them to go up to the high place.

1 Sam. 9:22: Then Samuel took Saul and his servant and brought them into the hall...

1 Sam. 10:1: Then Samuel took the flask of oil, poured it on his head, kissed him, and said, Has not the Lord anointed you a ruler over his inheritance?

WAR WITH THE PHILISTINES 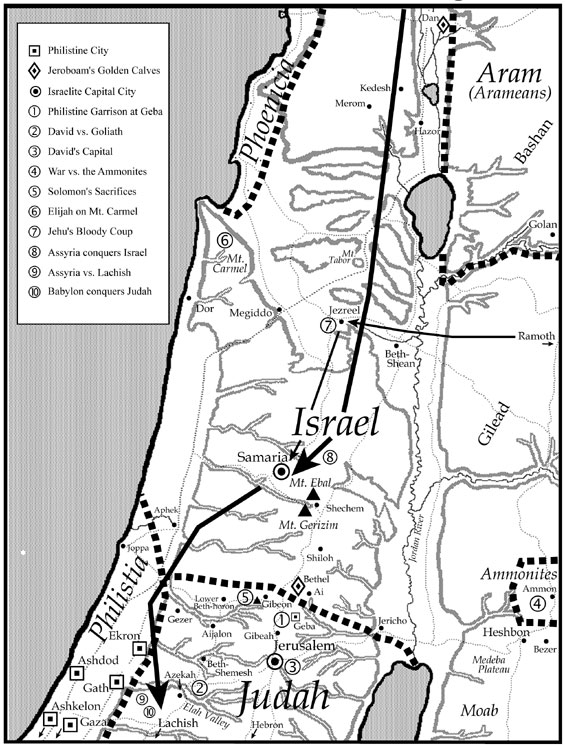 1 Sam. 13:19-20: Now no blacksmith could be found in all the land of Israel, for the Philistines said, Lest the Hebrews make swords or spears. So all Israel went down to the Philistines, each to sharpen his plowshare, his mattock, his axe, and his hoe.

1 Sam. 13:22: Neither sword nor spear was found in the hands of any of the people...but they were found with Saul and his son Jonathan.

Elah Valley:  Site of the confrontation of David and Goliath (see #2 on the map above).

Representative warfare:  Individuals or small groups fighting in place of the whole army.

1 Sam. 17:5-7: And he had a bronze helmet on his head, and he was clothed with scale-armor.... He also had bronze greaves on his legs and a bronze javelin slung between his shoulders.... And the head of his spear weighed six hundred shekels of iron

David’s Sling:  Not to be confused with the Y-shaped slingshot used as a children’s toy. A sling is twirled around the head and releases a projectile at high velocity. Slings served as weapons in ancient armies.

Discovery: The Tel Dan Stele. Found at Dan, its Aramaic inscription mentions the house of David as the ruling dynasty of Judah (9th cent. BC, found in 1993; Avraham Biran).

Stele: An upright stone with writing on it.

Discovery: The Moabite Stone. Also known as the Mesha Stele. The victory stele of the Moabite king Mesha commemorating a conflict with Israel. Found in Jordan in the 1800’s. It, too, mentions the house of David.

Discovery: The Shishak relief. A geographical list of the victories of Pharaoh Shishak (Shoshenq I) carved in a wall of the Temple of Amun at Karnak. Mentions the highland [heights] of David. Carved within fifty years of the time of David. 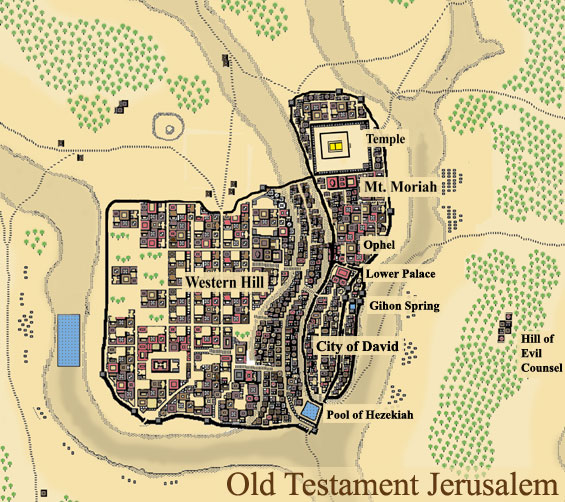 Gihon Spring: The only natural water source for the city of Jerusalem.

2 Sam. 5:9: And David built all around from the Millo and inward.

Jerusalem: The name may mean Jebusite Salem. It’s also found written in ancient records as Urushalim, which may mean Foundation of Peace. (See #3 on the map of Israel above.)

Tzinnor: An obscure Hebrew word that means something like a drainage ditch or water tunnel.

1 Chron. 11:6: And David said, Whoever first strikes a Jebusite, he will be leader and captain [of the army]. And Joab son of Zeruiah went up first, and he became the leader [of the army].

David rapidly extended his kingdom over the Philistines, the Moabites, the Edomites, the Arameans, and the kingdom of Zobah—all the way to the Euphrates River (2 Sam. 8).

Ammonites:  Descendants of Lot, the nephew of Abraham. The tell of their ancient capital city of Ammon can be seen in the center of modern Amman, the capital of the modern nation of Jordan (see #4 on the map of Israel above).

Molech (or Milcom):  The bloodthirsty god of the Ammonites, worshipped with human sacrifice.

Discovery: An Ammonite temple with the bones of young children offered up as burnt sacrifices. Found near the modern Amman airport.

Topheth:  An Israelite worship place to Molech located in the Gehinnom valley, right next to Jerusalem.

Uriah the Hittite:  A foreigner, a Hittite, who had joined himself to Israel. Uriah means “light of Yhwh.”

1 Kings 2:10: Then David slept with his fathers and was buried in the City of David.

Discovery: Several large rock-cut chambers in the southern part of the City of David that may have been the royal tombs of the house of David. They were found by Raymond Weill in an expedition funded by Lord Baron de Rothschild (early 20th century).

1 Kings 1:38-39: They had Solomon ride on King David’s mule and brought him to Gihon [the Gihon Spring].... Then they blew the trumpet and all the people said, Long live King Solomon!

2 Chron. 1:3: Then Solomon...went to the high place that was at Gibeon, for God’s Tent of Meeting [the Tabernacle] was there, which Moses...had made in the desert.

1 Kings 3:4-5: And the king [Solomon] went to Gibeon to sacrifice there, for that was the great high place. Solomon offered up a thousand burnt offerings on that altar. In Gibeon, the Lord appeared to Solomon in a dream of the night...

Solomon extended the city of Jerusalem to the north of David’s original city (the City of David). This extension included the northern part of Mt. Moriah where he built the Temple (see the Jerusalem map above).

Discovery: A small ivory pomegranate with the inscription: “Belonging to the Temple of Yhwh, holy to the priests.”

Discovery: A plaque of King Joash mentioning repairs that were done in the Temple. (The authenticity of this plaque has been challenged but not disproven.)

Western Wall Excavations:  Archeological excavations along the outer base of the western wall of the Temple Mount.

Es-Sakhra:  Arabic name of the large piece of bedrock under the Dome of the Rock. It stands a total of six feet above floor level, nine feet above the surrounding bedrock surface. It is known to Jewish legend as the Foundation Stone, the first piece of dry land to appear during the Creation.

Scarp:  A vertical rock cliff. There is a natural scarp (not man-made) on the north and west sides of es-Sakhra.

Foundation trench:  A place where the underlying bedrock has been smoothed out in order to lay a wall on top of it. There is a foundation trench on the south side of es-Sakhra.

1 Kings 8:8: But the poles were so long that the ends of the poles could be seen from the Holy Place before the inner sanctuary.

Eze. 28:14: You were the anointed covering cherub... (often understood as a reference to Satan).

1 Chron. 28:18: ...and gold for the model of the chariot, the cherubs that spread out their wings and covered the Ark of the Covenant.

Psa. 99:1: The Lord reigns, let the peoples tremble; he sits on the cherubs, let the earth shake!

Eze. 1:26: The likeness of a throne; and on the likeness of the throne, a likeness with the appearance of a man on it above. This throne appears in the storm-cloud of God (Eze. 1:4) with its strange wheels (Eze. 1:15-21), traditionally understood to be the chariot of God.

Rev. 4:6: And in the center before the throne and around the throne were four living beings covered with eyes, front and back.

1 Kings 10:22,27: For the king had at sea the ships of Tarshish...bringing gold and silver, ivory and apes and peacocks.... And the king made silver as common as stones in Jerusalem...

Haile Selassie:  The last well-known king of Ethiopia (1930-1974). He and his predecessors claimed descent from a son of King Solomon and the Queen of Sheba.