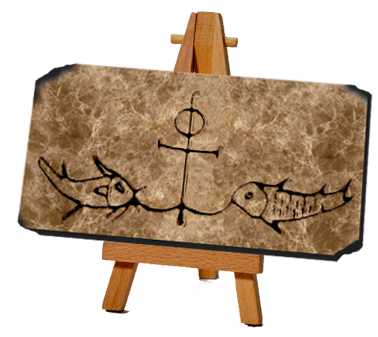 Early Christian symbol from the catacombs of Rome

Part 1a: Jews and Gentiles in the Body of Messiah

Jewish Christianity
Why Should We Care?
Pentecost
Zealots for the Law
The Prophet like Moses
Paul and the Jewish Law
Gentiles and the Jewish
Law
The Council of Jerusalem 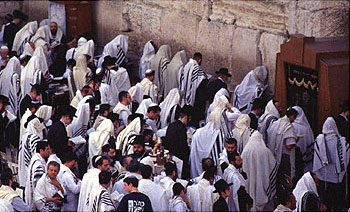 Why Should Christians Care about the Jewish Roots of Christianity?
The Seven Laws of Noah
Did Jesus Abolish the Jewish Food Laws?

The Jewish Roots of Chris­tia­nity

The Fertile Root:
Jews and Gentiles in the Body of Messiah


The contradiction of Jewish Christianity: Mosaics at the Garden of Gethsemane (Church of All Nations).

Romans 11:1: For I, too, am an Israelite, from the seed of Abraham, of the tribe of Benjamin.

Romans 9:27: Though the number of the sons of Israel be as the sands of the sea, it is the remnant that will be saved.

Why should we care about the early Jewish Christians?

Acts 11:19: Those who were dispersed…made their way…speaking the word to no one except to Jews alone.

The gospel was at first spread only to Jews in Phoenicia (Lebanon), Antioch (in Turkey), Cyprus, Asia Minor (Turkey), Greece, and Rome—as it says in the book of Acts; but also to Alexandria (in Egypt), Cyrene (in Libya), Edessa (in Syria), Persia (Iraq and Iran), and even to India in the East—as we know from history.

Eph. 2:12,19: Remember that you were at that time without Messiah, alienated from the citizenship of Israel and strangers to the covenants of promise.... [but now] you are no longer foreigners and strangers, but you are fellow-citizens with the holy ones and members of the household of God.

Rom. 11:17: But if some of the branches were broken off, and you, being a wild olive, were grafted in among them and became partaker with them of the rich root of the olive tree...

PENTECOST (SHAVUOTH, THE FEAST OF WEEKS)

Acts 2:17: And it will be in the last days, says God, I will pour out of my Spirit on all flesh, and your sons and your daughters will prophesy, and your young men will see visions and your old men will dream dreams.

Gal. 4:4: When the fullness of time came, God sent forth his Son.

Acts 1:8: When the Holy Spirit comes on you, you will receive power, and you will be my witnesses.

Jer. 31:33: I will put my law in their inward parts, and on their heart I will write it

Rom. 3:31: Do we then nullify the Law through faith? May it never be! On the contrary, we establish the Law

Acts 21:20: You see, brother, how many tens of thousands there are among the Jews who have believed, and they are all zealots for the Law.

Worship in the Temple:


The Way (in Hebrew, Ha-Derekh) was the first name used for Christianity by believers. A similar word is used in modern Judaism to describe the correct way to obey the Law (Halakha).

Deut. 18:18-19: I will raise up [resurrect] a prophet for them from among their brothers like you [Moses], and I will put my words in his mouth, and he will speak to them all that I command him.... The man that will not listen to my words that he will speak in my name, I will require it from him.

Matt. 5:17: Do not suppose that I came to abolish the Law or the Prophets; I did not come to abolish, but to fill them.

Acts 20:6: We sailed from Philippi after the days of Unleavened Bread...

Acts 20:16: He [Paul] was hurrying to be in Jerusalem, if possible, on the day of Pentecost.

Acts 16:8: But I will remain in Ephesus until Pentecost...

Acts 21:21: They have been told about you, that you are teaching all the Jews who are among the Gentiles to forsake Moses, telling them not to circumcise their children nor to walk according to the customs

Acts 28:17: I [have] done nothing against our people or the customs of our fathers [the Law].

Acts 6:13-14: They put forward false witnesses who said, This man does not stop saying things against the Holy Place [the Temple] and the Law; for we have heard him say that this Jesus, the Nazarene, will destroy this place and will alter the customs which Moses delivered to us [the Law].

Acts 16:3: Paul wanted this man [Timothy] to go with him; and he took him and circumcised him because of the Jews who were in those parts.

Gal. 5:2: If you receive circumcision, Messiah will be of no benefit to you

1 Cor. 7:18,20: Was anyone called who is circumcised [Jewish]? Do not remove the marks of circumcision. Has anyone been called in uncircumcision [a Gentile]? Let him not be circumcised.... Each in the calling in which he was called, let him remain in this [his calling].

Rom. 11:29: For the gifts and the calling of God are unchangeable.

THE COUNCIL OF JERUSALEM (Acts 15)

Proselyte: a convert to Judaism.

The Laws of Noah: According to the rabbis, these were the laws given by God to all mankind: Seven laws are binding on the descendants of Noah: the establishment of courts of justice, the prohibition of blasphemy, of idolatry, of adultery, of murder, of robbery, and of eating the flesh cut from a living animal (Sanhedrin 56a:24).

Gen. 9:9: I myself establish my covenant with you [Noah] and with your descendants after you.

Gen. 9:16: When the bow is in the cloud, then I will look at it to remember the everlasting covenant between God and every living creature...

6) No Flesh from a Living Animal (flesh with the blood in it):


Godfearer (or Fearer of Heaven, Righteous Gentile, Son of Noah): Any Gentile who is willing to live according to the Laws of Noah.

Rom. 14:14: I know and am convinced in the Lord Jesus that nothing [he’s talking about food] is unclean in itself.

Different laws for different people: men and women, priests and Levites, kings, children, married and single, Jews (the ezrachim) and Gentiles (the gerim)

Eph. 4:4,7,15-16: One body and one Spirit.... But grace was given to each of us individually, according to the measure of Messiah’s gift to each of us.... from whom the whole body...is, as a result of the divine action corresponding to the measure of the gift given to each individual part, making the growth of the body result in its being built up in love