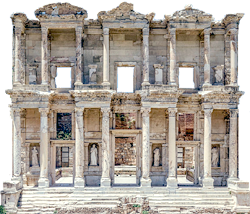 Library of Celsus at Ephesus

The Jewish Roots of Christianity

What Kind of Water is in the Jewish Ritual Bath (Mikveh)?
Infant Baptism?

The Washing of Water
with the Word

Ephesians 5:26 is one of those verses that popped off the page for me as a young Christian. Why? Because I just didn’t get it. It’s usually translated something like this:

that he [Messiah] might sanctify her [the Church], having cleansed her by the washing of water with the word. (NASB)

But what is the washing of water with the word?

The first part of the verse (that he might sanctify her) is easy to understand. It refers back to the previous verse, which says that Jesus turned himself in (or gave himself up) to the authorities because of his great love for the Church (Eph. 5:25b). This led to his being crucified, which is the means by which we, the Church, are made holy, that is, set apart from the world (sanctified) to God.

But what about the second part of the verse: having cleansed her by the washing of water with the word (Eph. 5:26)? This is usually explained as the cleansing action of the Word of God in our lives: that it washes us like water, which is certainly true. But if that’s the intended meaning, it would have been much easier to say, having cleansed her by the washing of the word. Why were the words of water added? We must be missing something. And as it turns out, this is a great example of why we need our Jewish Roots to understand the Bible correctly.

But first let’s deepen the mystery. The language is even more puzzling in the original: having cleansed her for the bath of water by the word (literally in Greek). Why would you need to cleanse someone in preparation for a bath?

The beginning of a solution comes from the Greek word for bath used here: loutron (λουτρόν). Though often translated as a washing (NASB, KJV, etc.), the primary meaning is a bath, as you can see for yourself by clicking here or here. In Titus 3:5, this same word should also be translated bath: according to his mercy he saved us through a bath of regeneration and a renewal by the Holy Spirit.* This is a reference to the immersion of baptism, which was almost always done in the early Church by dipping the entire body in water, just as some churches still do it today. If we transfer this same meaning over to Ephesians, our verse now makes more sense: Jesus cleansed the Church by his word to prepare her for the bath of baptism.

* This is also the understanding of the Latin Vulgate, which uses lavacrum (bath), and the German which uses Bad (bath, in the Lutherbibel 1545 and the SCL). The French (Louis Segond) provides the intended meaning of the allusion directly: baptême (baptism).

But why this double cleansing? This is a source of difficulty for many translators. But it reflects the common procedure used in Jewish ritual immersion, the origin of Christian baptism. Jewish immersion is done in a mikveh. This is a basin of water similar in size to the baptistries found in churches that practice immersion baptism, with a set of stairs leading down into the water. But unlike most modern baptistries, they were cut out of bedrock and filled with rainwater.

Immersion in a mikveh is not for getting the dirt off. It’s for ritual cleansing. So it was (and still is) the practice to take an ordinary bath first. This way, the water in the mikveh stays clean.

This two-step procedure matches the double cleansing that Paul is talking about: having cleansed her...by the word is the first cleansing—to get the dirt off. For the bath of water is the second cleansing—the ritual bath of baptism.

This gives us the translation:

that he might make her holy, having [first] cleansed her for the bath of the water [of baptism] by his word.

Sorting out the verb tenses gives us the following sequence of events: (1) Jesus first cleansed the Church by his word to prepare us for baptism, then, (2) because of his love for us, he suffered and died for us, that we might be set apart as holy.

Now we’re ready to put this back into its original context, in which Paul is talking about a marriage relationship. The first part, the easy part, is about Messiah’s tremendous love for us, that he was willing to give himself up to crucifixion (Eph. 5:25b). The result of this self-sacrifice is to make us holy, to set us apart to himself (Eph. 5:26a). This is an allusion to the sanctification of the bride in a Jewish wedding (the kiddushin). This is when she is formally set apart to her husband. In the same way, the Church has been set apart, betrothed to Messiah, as a result of what he has done for us.*

* In the time of the New Testament, this setting apart of the bride was done in a betrothal ceremony that preceded the wedding itself (the nissuin) by as much a year or even longer. In the same way, the Church, though now betrothed to Messiah, is waiting for the wedding ceremony that will take place when he returns (Rev. 19:7,9).

The second part of the verse presents the beautiful picture of Jesus washing the Church by his word to prepare us for baptism. This is an allusion to the washing that precedes the ritual bath of a Jewish bride shortly before her wedding (her bridal mikveh). In this way, she makes herself ritually clean and ready for her husband on their wedding day. In the same way, the Church is now ritually clean through baptism, set aside (holy) to Messiah, and awaiting his return.

All of this is in the context of Paul’s instruction for husbands to love their wives (Eph. 5:25-33). Like Messiah, husbands should take the more difficult path. They should humble themselves for their wives’ benefit. But it also teaches us about the nature of true, godly love: that we, like Jesus, should be willing to humble ourselves on behalf of those who are not yet spiritually clean, sharing with them the Word of God, that they might be cleansed for the bath that leads to eternal life.