See notes below. (Sections in parentheses are covered in the longer form of this seminar and in a coming book version.) 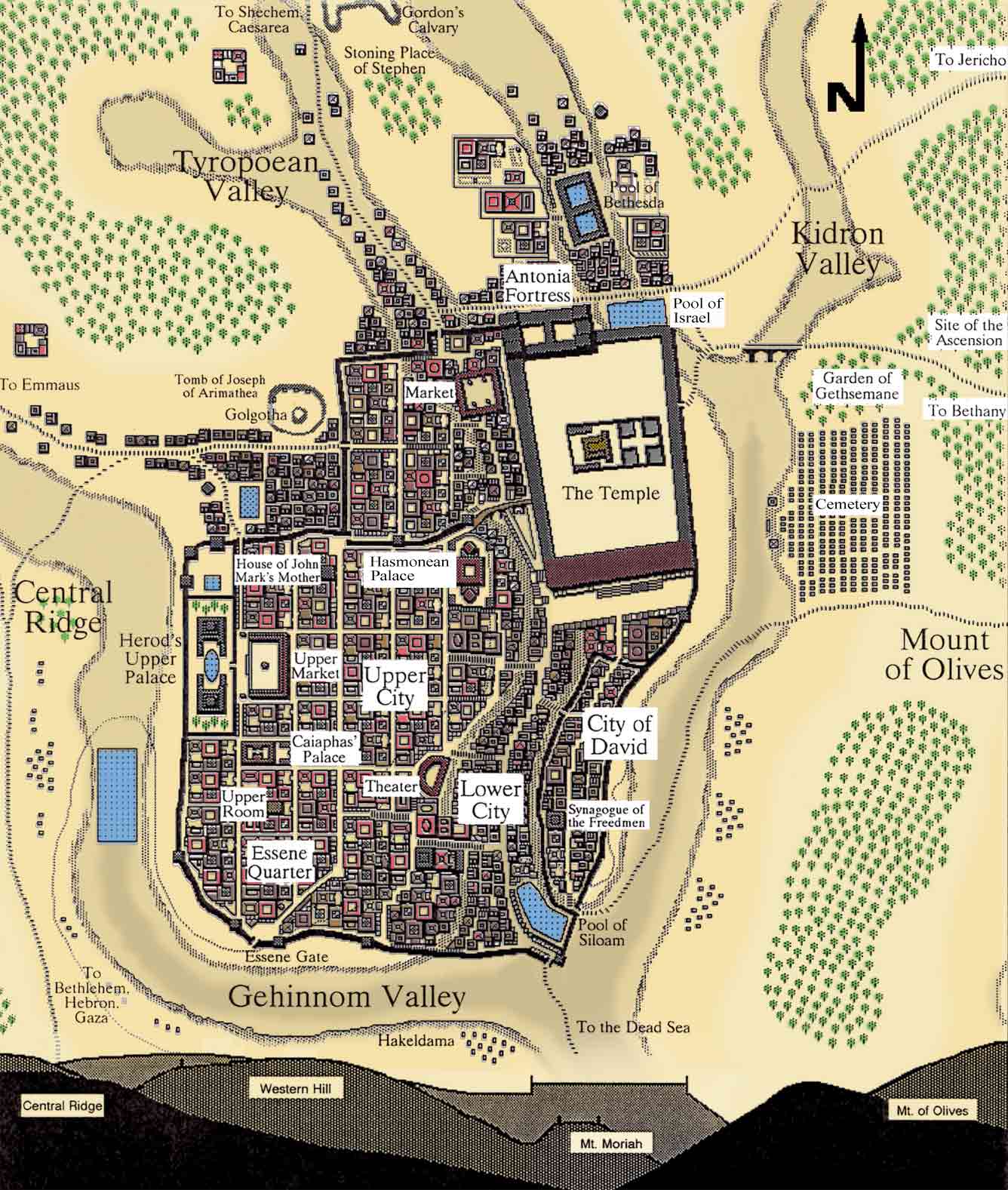 Gehenna: The name used by Jesus and the rabbis for the place of eternal punishment. Based on the Gehinnom Valley just south of Jerusalem where the city’s trash was burned.

Matt. 18:9: And if your eye causes you to stumble, pluck it out, and throw it from you. It is better for you to enter life with one eye, than having two eyes, to be cast into the Gehenna of fire

Luke 12:4-5: Do not be afraid of those who kill the body, and after that have no more that they can do. But I will warn you whom to fear: fear the one who after he has killed has authority to cast into Gehenna; yes, I tell you, fear him!

Jer. 7:31: The sons of Judah have built the high places of Topheth, which is in the valley of the son of Hinnom, to burn their sons and their daughters in the fire.

(Acts 1:16-19: Judas.... acquired a field...and falling headlong, he burst open in the middle.... In their own language that field was called Hakeldama, that is, Field of Blood.)

Zech. 14:4: And in that day his feet will stand on the Mount of Olives

Antonia Fortress: The barracks of the Roman soldiers stationed in Jerusalem. The robes of the high priest were also stored here.

Bethany: In Hebrew, Beth-oni, which means house of the poor.

Bethphage: In Hebrew, Beth-pagee, which means house of the first-ripe fig.

Zech. 9:9: Rejoice...daughter of Zion!... Your king is coming to you. He is righteous and victorious, humble and riding on a donkey

John 6:15: Jesus, therefore, when he learned that they were about to come and carry him off to make him king, went back to the mountain by himself alone.

Feast of Tabernacles: Celebrated in September/October with the waving of palm branches. It was widely believed to be a symbol of the coming Messianic Age.

Discovery: Jewish and Roman coins with palm branch designs. Roman Judea Capta coins (Judea is subdued) were issued after the destruction of Jerusalem in AD 70. They show a standing Roman soldier, a drooping palm tree, and a weeping woman. The message? The end of Jewish nationalism.

John 12:13: They took the branches of the palm trees and went to meet him, and were crying out, Hosanna...

Matt. 21:8: And most of the multitude spread their garments in the road, and others were cutting branches from the trees and spreading them in the road.

Fadus: One of the successors of Pontius Pilate (from AD 44-46). During his reign, a certain Theudas called his followers to the Jordan River where they were met by Roman soldiers (Antiquities 20.5.2 § 102).

Acts 5:36: Some time ago Theudas rose up, claiming to be somebody; and a group of about four hundred men joined up with him. And he was slain; and all who followed him were dispersed...

Acts 5:37: After this Judas the Galilean rose up, in the days of the census, and incited the people behind him to revolt. He, too, lost his life and all those persuaded by him were scattered.

Acts 21:38: Then you are not the Egyptian who some time ago stirred up a revolt and led the four thousand men of the Dagger-Carriers out into the desert

Sicarii (Dagger-Carriers): A radical group of Jewish Zealots, known for the small daggers (sicae) that they carried concealed in their cloaks.

Luke 19:41-44: If you had known in this day, even you, the things which make for peace! But now they have been hidden from your eyes. For the days will come upon you when your enemies will throw up a siege bank around you, and surround you, and hem you in on every side, and will level you to the ground and your children within you, and will not leave in you one stone upon another, because you did not recognize the time of your visitation

Luke 19:11: They supposed that the kingdom of God was going to appear immediately.

Acts 1:6: Lord, are you at this time restoring the kingdom to Israel?

Matt. 21:15: The children...were crying out in the Temple and saying, Hosanna to the Son of David.

Matt. 21:12: Jesus threw out all those who were buying and selling in the Temple, and overturned the tables of the moneychangers and the seats of those who were selling the doves

Markets of the Sons of Annas: The stalls of the merchants in the Temple area which Jesus opposed. Named for Annas (Chanan in Hebrew), the father-in-law of Caiaphas. Annas had five sons who ruled as high priest.

Essene Quarter: The southwest corner of the Upper City. Identified by the Essene Gate discovered by archeologists.

Luke 22:10: When you have entered the city, a man will meet you carrying a pot of water; follow him into the house that he enters

Furnished: Literally, spread with couches or cushions for reclining.

John 13:23: And one of his disciples was reclining at Jesus’ chest, whom Jesus loved [John]

Large: Mega in Greek. A U shaped Triclinium table, around which people reclined on three sides.

Guest Chamber (guest room): In Greek, katalyma. Used by strangers for the celebration of the Passover Meal.

Seder: Hebrew for order. The name given to the ritual Passover meal, because everything must be done in a certain order.

Luke 22:15-16: I have earnestly desired to eat this Passover with you before I suffer; for I say to you, I will never again eat it until it is fulfilled in the kingdom of God.

The Seder Passover Meal as it was practiced in Jesus’ day: