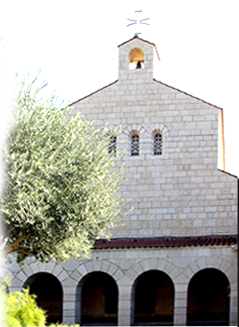 Church of the Multiplication of Loaves and Fish at Tabgha

The Law of the Messiah
Jesus

Who is the Messiah?

The Feeding of the Five Thousand

At the height of Jesus’ popularity, thousands came from all the surrounding regions to hear him teach and see his miracles (Matt. 4:25). The disciples were also busy, sent out two by two to heal, cast out demons, and proclaim a message of repentance (Mark 6:7-13). After one of these missions, Jesus, seeing that they were tired, invited them to come away with him to a place in the uninhabited countryside (Mark 6:31). What a welcome word of encouragement! He understood their need to rest, to get away from the busy activity of ministry, and invited them to be refreshed with him.

* In the Byzantine period (4th-7th cent. AD), the miracle that took place in this location, the Feeding of the Five Thousand, was commemorated by the Church of the Multiplication at Tabgha. The remains of this ancient church were discovered in the 19th century and rebuilt in 1982. But this location, in the northwest corner of the Sea of Galilee, doesn’t match the Bible’s description of an isolated place near Bethsaida. Instead, it would have brought the disciples, after crossing the lake, right back to the area where they started (at Gennesaret; Matt. 14:34, Mark 6:53). The inaccurate location of the church was surprising, since pilgrim records correctly identified the location of Bethsaida in the northeast corner of the lake as late as the 6th century. This mystery has only recently been solved by the discovery of the long-lost city of Bethsaida itself at Al-Araj, under a thick layer of debris washed down from the Golan Heights above. It now appears that as a result of a series of disasters, the area was considered unsuitable, and the church built in a safer location.

The mention of abundant green grass [5] tells us it was springtime, after the winter rains, when the hills turn a beautiful green. Later, in the summertime, the grass dries and the hills turn a light tannish brown again. This agrees with John’s note that it was the time of Passover, which is in the spring (John 6:4).

Jesus wasn’t alone with the disciples for long. The crowds could tell from the direction of their boat where they were going, and ran ahead to meet them on the shore (Mark 6:33). But instead of sending them away, Jesus ministered to them and took care of them, teaching them and healing them (Mark 6:34).

Because this is an isolated area, even today, the disciples became concerned when it got late how the people would get something to eat and where they would spend the night (Mark 6:35-36). This is when Jesus shocked the disciples by asking them to feed the crowd (Mark 6:37). But where would they get that much food? Even if there were shops nearby, it would cost at least 200 denarii, nearly a year’s wages (Mark 6:38).

John tells us that the only food available came from a young boy. The five loaves (artous) he had were actually small, rounded pieces of flatbread, like pita bread, made from barley (John 6:9). Barley is a grain like wheat, but less expensive and was usually eaten by the poor. The two fish were opsaria, which means small fish, perhaps the abundant freshwater sardines found in the Sea of Galilee. That was not much food for so many people.

But Jesus is not limited by our lack of resources. He had the people recline in the grass symposia symposia (group by group, Mark 6:39). This Greek word, the root of the English word symposium, refers to the time after a formal meal when drinks were shared and various topics discussed. This quite appropriately describes a Passover Meal (a Seder) eaten on the first evening of the holiday, with its four cups of wine and reading and singing. Mark adds the colorful description prasieh prasieh (row by row, as in the orderly beds or rows of plants in a garden). This describes these groups, reclining on the ground in their colorful garments, as a series of little garden plots—another image of springtime and the harvest that took place at the time of Passover (Mark 6:40).*

* This beautiful description is rather blandly translated in groups (NASB, NIV) or in ranks (KJV, Amplified), although the Amplified does mention the meaning of the word in a note.

After blessing God for the food, Jesus distributed it.* Miraculously, that little bit of food fed the whole crowd of more than five thousand people, with food left over (Mark 6:41-43). How did this happen? God has resources that we know nothing about. He is able to meet all of our needs, even when the resources available to us seem woefully inadequate.

* Although many translations imply that Jesus blessed the food, the Greek simply says he blessed. This refers to the typical Jewish blessing at the beginning of a meal, a blessing not of the food, but of God who has provided the food: Blessed are you, Lord our God, King of the Universe...

What was the reaction of the people to this fantastic miracle? Surely this is the Prophet who is to come into the world! (John 6:14). Who is the Prophet? This is the prophet like Moses mentioned in Deut. 18:18—a prophet that many identified with the Messiah and were eagerly expecting. Their reasoning is easy to follow: it was Passover time, they were in a wilderness area with Jesus, and he provided bread from heaven for them, as Moses did in the Sinai. This was obviously the prophet like Moses they were waiting for! So what did they do? They tried to crown Jesus as their Messianic king! (John 6:15) This is hardly a rejection of Jesus as Messiah, as many teach. Rather, he is the one who rejected their ideas of who the Messiah was and what he should do: he went up into the hills alone to get away from the crowd.

The people wanted a Messianic king that would lead them to victory over the Romans. The village of Gamla, just a few miles away, was home to the Zealot resistance movement. The Zealots wanted to fight a war against Rome. But Jesus didn’t want to lead an attack against the Romans. And so when evening came, he sent his disciples away in a boat and withdrew by himself into the hills. But if Jesus wasn’t the kind of Messiah they were expecting, then who was he, and what was his mission?

According to John, the disciples began to cross back across the Sea of Galilee to the west (toward Capernaum; John 6:17). But a strong wind soon opposed them, stirring up the sea (John 6:18). This tells us that the wind was coming from the west, the direction from which most strong weather comes in Israel. Mark says that Jesus could see them straining at the oars (Mark 6:48), a hint to the beautiful view over the Sea of Galilee from the Golan Heights, toward which Jesus had ascended. Since Passover is always at the time of a full moon, perhaps he could just make out the dark boat in the reflected moonlight on the water.

Normally, on a calm day, it would take only about three hours to row across the Sea of Galilee (about 6.5 miles/10.5 km where they were crossing). But because of the stiff wind, the disciples were still fighting their way across in the fourth watch of the night (about 3-6 am). That’s when, Matthew tells us, they suddenly saw someone coming toward them, walking on the water (Matt. 14:25). Their first reaction was that it was a ghost, and they screamed out in fright (Matt. 14:26). But it was Jesus, who said to them, Take courage, I am: don’t be afraid (Matt. 14:27). Although many Bibles translate Jesus’ words, It is I, the Greek clearly says, I am (ego eimi). This is no accident: the same Greek words appear in all the gospels that mention this event (Matthew, Mark, and John).

Mark explains that the reason for their astonishment was their misunderstanding of the miracle of the feeding of the five thousand (Mark 6:51-52). They, like the crowd, took it to confirm that Jesus was an earthly Messiah: a prophet and, they hoped, a king. But they hadn’t correctly understood the kind of Messiah Jesus actually was. So he had to take them one step further. The miracle of walking on the water was not only an awesome act of power, it was an intentional hint to Job 9:8, which describes God alone as able to tread on the heights of the sea. This is also the meaning of Jesus’ words: I am is a hint to Exodus 3:14, where God revealed himself to Moses as the I am that I am. By identifying himself as the I am, Jesus identifies himself as the living God.

In Matthew, Peter cries out saying, If you are, command me to come to you on the water (Matt. 14:28).* In other words, if you really are the I am, if you really are God, then you can make me walk on the water, too. So Jesus commanded him to step out of the boat. And he did, and walked to Jesus on the waves (Matt. 14:29). Peter, too, could walk on water because Jesus is the great I am.

* This is the literal meaning of the Greek words ei su ei (if you are), not if it is you as in most translations.

This was not simply a demonstration that Jesus is God. By enabling Peter to walk on the water, Jesus gives us a picture of his true mission: to share his power and his glory with us, to give us victory over the dangers and difficulties of this life. This is what Paul is talking about in Ephesians when he says that the power of God in us who believe is the same power that raised Jesus from the dead and carried him up into heaven (Eph. 1:19-20). It’s what Peter is talking about when he says that we as human beings can share in God’s divine nature (2 Pet. 1:4)!

This incredible relationship, in which God is willing to share his power with us, operates through faith. If you trust God, you receive from him. But if you don’t trust him, you cannot receive. When Peter began to doubt, he started to sink beneath the waves (Matt. 14:30). But even then, in Peter’s moment of fear, Jesus didn’t abandon him. He grabbed hold of Peter and helped him into the boat (Matt. 14:31-32).

What was the reaction of the disciples? They prostrated themselves in worship, as the Jewish people regularly did in the Temple before God, saying Surely you are the son of God! (Matt. 14:33).* They were finally getting the message that Jesus was not just an earthly Messiah, but God’s Son, the divine I am. And so they did what religiously observant Jews would never do to anyone else but God—they worshipped him.

* Prostration (bowing down on your knees with your face to the ground) is the literal meaning of the Greek prosekúnēsan used here. This is an action that today many associate with Muslim worship, but it was used by the Jewish people many hundreds of years earlier, and even is today on rare occasions.

What about you? Who is Jesus to you? A prophet, a healer, a Messiah? Or is he the great I am? If you trust—have faith—that he is who he said he is, then he can help you, too, and give you victory over the difficulties of life. You only need to ask.