Scroll and Synagogue:
Jewish Religion in the Time of Jesus

The First Temple (the Temple of Solomon) stood from 1,000 BC to 586 BC when it was destroyed by the Babylonians.

Herod the Great:  King of the Jews when Jesus was born. 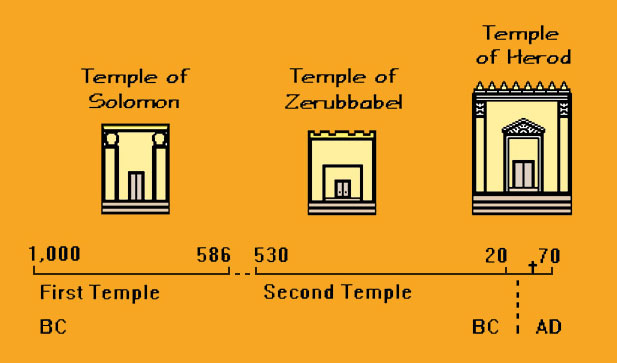 The Third Temple, according to many of the rabbis, will be built when Messiah comes.

The Temple Institute:  A Jewish organization in Israel dedicated to researching and preparing for the rebuilding of the Jewish Temple (the Third Temple).

The Temple Mount Faithful:  Another organization dedicated to the rebuilding of the Temple.

The Red Heifer:  A perfectly red cow used in preparing special water used for cleansing from the impurity of death (Num. 19:1-13). This water is considered necessary for cleansing the Temple area before Jewish worship can begin there again.

The Half-shekel Temple Tax:  A tax collected from the Jewish people to maintain the Temple and provide for public offerings. It is mentioned in Matt. 17:24, where Jesus told Peter to catch a fish with a coin in its mouth to pay the tax.

The Twenty-four Stations (the Maamadot):  Groups of men assigned to witness the sacrifices in Jerusalem as representatives of the people.

Correction: The organization seeking to raise young Jewish boys in purity as priests is not Ateret Cohanim. It is instead another organization known as the Movement to Rebuild the Temple. This group, however, now appears to have ceased operation (its website is no longer operating).

(According to the rabbis, the Second Temple was inferior to the First Temple because it lacked the Ark of the Covenant, the holy fire that had descended on the altar, the Shekinah (the glory of God’s presence), the spirit of prophecy, and the Urim & Thumim.)

As the rabbis said, “He who has not seen the Temple of Herod has never seen a beautiful building” (Bava Batra 4a). 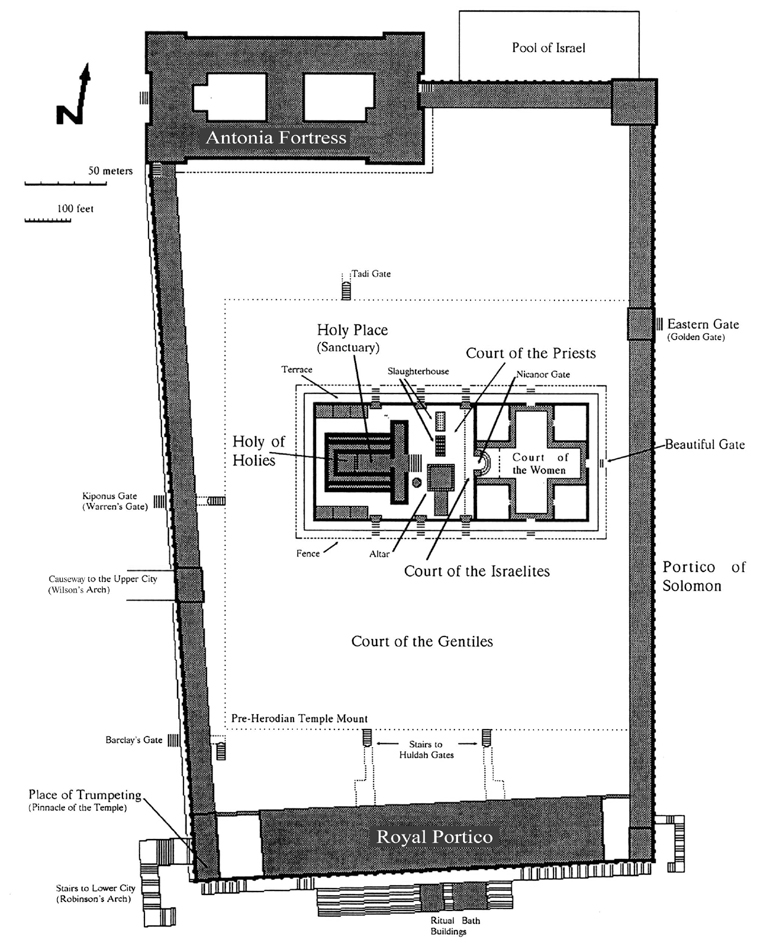 The Temple of God in the Time of Jesus the Messiah

Discovery: The location of the 500 x 500 cubit pre-Herodian Temple platform (see diagram above). Herod expanded the Temple Mount to the north, the west, and the south. This made it 35 acres (14 hectares) in size, the area of 31 U.S. football fields. 250,000 people could worship here at one time.

THE TEN LEVELS OF HOLINESS

2) The walled cities of Israel.

Finally found the reason for no chickens or geese: Because they pecked at garbage and insects, and might bring ritually impure material into contact with consecrated food (Bava Kamma 7:7, Bava Kamma 82b:14, Avot d’Rabbi Natan 35:2).

4) The Temple Mount platform (Har Ha-Bayit: The Mountain of the House [of God])

Huldah Gates: The southern entrance gates to the Temple Mount.

Psa. 100:4: Enter his gates with thanksgiving and his courts with praise

Discovery: Entrance stairway to the Temple Mount (the teaching stairs of the rabbis).

Discovery: Ritual bath buildings at the entrance to the Temple Mount with more than thirty-six ritual baths (mikvaoth).

Luke 2:22: And when the days for their purification [of Mary and the newborn Jesus] according to the Law of Moses were completed, they brought him up to Jerusalem to present him to the Lord

Acts 2:41: So then, those who had received his word [on the Day of Pentecost] were baptized; and there were added that day about three thousand souls

Sanhedrin: The Council of the Elders. The Great Sanhedrin Council of seventy members was the Supreme Court as well as the legislature of the Jewish people. There were also lesser sanhedrins around the country that served as lower courts.

Portico: A covered walk with a roof supported by columns on one side and a wall on the other.

The Royal Portico: The largest portico on the Temple Mount, built up above the main, southern entrance to the Temple. This is the probable location of the merchants and moneychangers cast out by Jesus.

Mark 11:17: Is it not written, My house will be called a house of prayer for all the nations [the Gentiles]? But you have made it a robbers’ den.

The Portico of Solomon: The eastern portico of the Temple where Jesus’ disciples often met.

John 10:23: Jesus was walking in the Temple in the Portico of Solomon.

Acts 5:12: They [the disciples of Jesus] were all with one accord in Solomon’s Portico. This was after Jesus’ resurrection.

The importance of oral instruction in the time of Jesus.

Golden Gate (Shushan Gate): The eastern gate of the Temple, leading out through the Portico of Solomon.

5) Terrace (Chel) and Stone Fence: A raised platform around the inner Temple area. This area and those inside it were permitted only to Jews. Signs were posted that said: No foreigner is to enter within the fence and enclosure around the Temple. Anyone caught doing so is answerable to himself for the death that will follow.

Acts 21:28: This is the man [Paul] who preaches to all men everywhere against our people...and besides he has even brought Greeks into the Temple and has defiled this holy place.

Eph. 2:14: For he himself is our peace, who made both [Jews and Gentiles who believe in him] one and destroyed the dividing wall of the fence, the hostility between the two, in his flesh.

(Luke 2:46: They found him in the Temple, sitting among the teachers)

6) Court of the (Jewish) Women: Women could go no further for ordinary worship.

Beautiful Gate: The eastern entrance to the Court of the Women.

Acts 3:6: I don’t have silver and gold, but what I do have I give to you: In the name of Jesus the Messiah of Nazareth, rise up and walk!

Trumpet-shaped Offering Receptacles: in a section of the Court of the Women known as the Treasury.

Luke 2:24: And to offer a sacrifice according to what was said in the Law of the Lord, A pair of turtledoves or two young pigeons (Lev. 12:8).

Stairs of the Levites: Where the Levites would stand to lead worship.

7) Court of the Israelites (Jewish Men).

1 John 4:20: The one who does not love his brother whom he has seen, cannot love God whom he has not seen.

8) Court of the Priests. The area around the innermost Temple building (the Sanctuary). Included the altar and the tables for slaughtering the sacrifices.

The chambers around the Court of the Priests were used for storing priestly vestments, a dining hall, fires for barefoot priests, sleeping quarters, preparation of the Showbread (Bread of the Presence), lambs awaiting the daily sacrifice, passage to ritual baths below, salt for the altar, and a place to salt the skins of sacrifices and to wash the sacrifices.

9) Sanctuary (Holy Place). Contained the Menorah (Golden Lampstand), the Table of Showbread (Bread of the Presence), and the Altar of Incense.

Luke 1:11: And an angel of the Lord appeared to him [to Zacharias], standing to the right of the altar of incense.

10) Holy of Holies. This innermost area was separated by two curtains from the Sanctuary (the Holy Place).

Heb. 9:12: He [Jesus] entered the [heavenly] holy place once for all, having obtained eternal redemption.

Jer. 3:16: And it will be in those days...they will no longer say, The Ark of the Covenant of the Lord. And it will not come to mind…nor will it be made again.

Discovery: Synagogues have been found in Israel from the time of Jesus, as well as a synagogue inscription in Jerusalem, likely from the Synagogue of the Freedmen (mentioned in Acts 6:9).

(Minyan: The required minimum number of adult men for a service in a synagogue.)

Ark:  A chest containing the scrolls of the Bible in a synagogue. In Jesus’ day this had wheels and was moveable.

Torah: Instruction. Hebrew name for the five books of Moses. A section from the Torah was read in the services on Sabbath, festivals, and the second and fifth days of the week.

Luke 4:16-17: As was his custom, he...stood up to read. And the scroll of the prophet Isaiah was handed to him. And he opened the scroll and found the place where it was written...

(Haftarah: The reading from the prophets in the synagogue service.)

Luke 4:20-21: And he closed the scroll...and sat down; and the eyes of all in the synagogue were fixed on him.

Discovery: A seat of Moses from the synagogue at Chorazin.

Matt. 23:2-3: The scribes and Pharisees sit in the seat of Moses, therefore all that they say to you, do and obey.

Ex cathedra:  An official ruling from the chair.

Let’s test your thoughts about the Pharisees with a true/false quiz:

Acts 15:5: But some from the sect of the Pharisees who believed...


Acts 23:8: The Sadducees say that there is no resurrection, nor an angel, nor a spirit.

Exo. 15:1: Then Moses and the sons of Israel will sing this song to the Lord.

Matt. 23:3: Do not do according to their deeds; for they say things, and do not do them.