Joseph, Moses, and the Exodus

ROUTE OF THE EXODUS

Reed Sea: In Hebrew, Yam Suf. This is the actual meaning of the Hebrew words usually translated incorrectly as Red Sea. This eliminates the branches of the actual Red Sea (the Gulf of Suez and the Gulf of Eilat). They have no reeds growing along their shores because of the salty water. 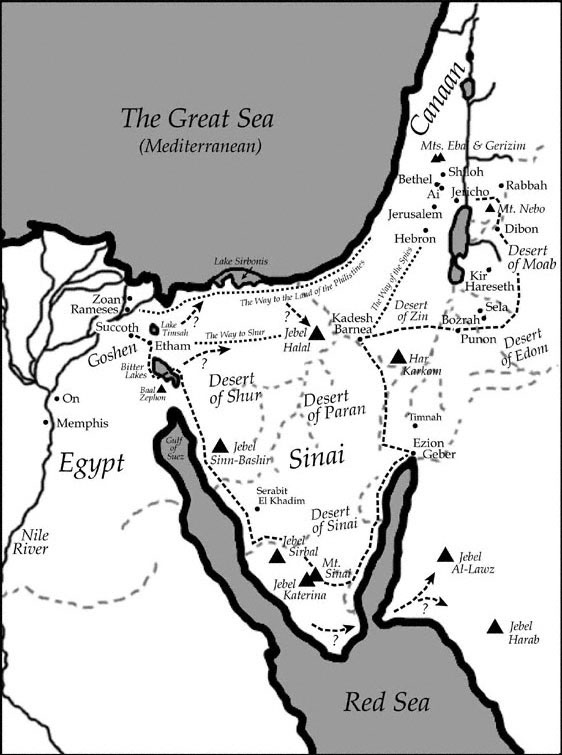 Exo. 15:22: And Moses led Israel out from the Reed Sea and they went out into the Desert of Shur...

Papyri Anastasi:  Preserve reports of Egyptian frontier officials stationed along the Shur line of forts. Papyrus Anastasi V tells of two escaped slaves from the palace at Pi-Ramesses (the same area from which the Israelites started) who fled across the Shur into Sinai at night.

Lake Sirbonis (or Bardawil): A shallow lagoon along the north shore of Sinai, separated by a shallow sand bar from the Mediterranean.

Exo. 13:17: And it came about when Pharaoh let the people go, that God did not lead them by the way to the land of the Philistines...

Lake Timsah: The closest to Goshen. But it’s very shallow, and too small: the chariots of Pharaoh could have easily driven around the lake.

Bitter Lakes: Strong east winds have been known to push water out of the lake every once in a great while, which then rushes back in when the wind stops.

Exo. 14:21: Then Moses stretched out his hand over the sea, and the Lord caused the sea to go back by a strong east wind all night, and turned the sea into dry land, so the waters were divided

Exo. 14:22: And the sons of Israel went into the middle of the sea on dry ground and the waters were a wall [or a protection] for them on their right [or south] and on their left [or north]

Jebel Musa: The traditional site of Mt. Sinai in southern Sinai (marked as Mt. Sinai on the map). Identified by Christian monks from the nearby Feiran Oasis in the 4th century AD. Site of St. Catherine’s Monastery.

Codex Sinaiticus: The oldest complete copy of the New Testament in the original Greek. Important to all modern translations of the Bible.

Quail: Migrate across Sinai by the thousands every year: the Bedouin set up nets to catch them.

Exo. 16:13: So it came about at evening that the quails came up and covered the camp...

Rotem: Also known as the broom tree. Can be seen in many of the dry riverbeds of the desert. One of the candidates for the source of the manna.

Cicada droppings:  A sweet, white substance eaten by the Bedouin. It spoils by noon.

Exo. 17:6: You will strike the rock, and water will come out of it, that the people may drink. And Moses did so in the sight of the elders of Israel.

THE LAW OF MOSES

Exo. 19:4: You yourselves have seen what I did to the Egyptians, and how I bore you on eagles’ wings, and brought you to myself

Exo. 19:5-6: Now then, if you will indeed obey my voice and keep my covenant, then you will be my own possession among all the peoples...

Code of Hammurabi:  A detailed code of law from three hundred years before the time of Moses

Vassal Treaty:  A type of treaty (associated with the Hittites) that closely matches the format of God’s covenant with Israel. It was used to clarify the relationship between a ruler and a newly conquered people.

1) Historical Prologue:  Here the ruler identified himself, and mentioned his favorable actions on the peoples’ behalf. Exo. 20:2: I am the Lord your God who brought you [singular] out of the land of Egypt, out of the house [a place] of slavery.

2) Stipulations: a) These usually included a loyalty clause, which prohibited forming treaties with other kings. Exo. 20:3: You [singular] will not have other gods in my presence. Exo. 20:4-5: You [singular] will not make for yourself a shaped image [an idol]; and any likeness that appears in heaven above or on the earth beneath or in the waters under the earth you will not make yourself bow down to or worship.

c) Following the basic, foundational principles of the Ten Commandments are the ordinances, specific laws or decrees, as well as what today we would call case law, decisions about how to apply the general principles in particular situations.

d) Most treaties would include instructions about a governor appointed by the king to rule the conquered area, and the provision the people were to make for him and his court. In the Law of Moses, this became the instructions to build the Tabernacle, where God himself would dwell among his people, along with instructions for religious worship, the provision for the priests (tithes), etc.

3) Witnesses: A third section specified the witnesses to the treaty. Normally, these were the pagan gods. Deut. 31:28: that I may...call the heavens and the earth to witness against them

4) Copy of Treaty Deposited: A fourth section mentioned where a copy of the treaty was to be kept. Ordinarily there were at least two copies, one kept by the king, the other by the people with whom he was making the treaty. This is why there were two tablets with the Ten Commandments. Exo. 32:15: ...tablets that were written on both sides... Exo. 25:16: And you will put into the ark the testimony that I will give you. Exo. 31:18: the tablets of the testimony.

5) Blessings & Curses: A fifth section specified blessings for obedience to the treaty, and curses for disobedience. These can be found in Leviticus 26 (and Deuteronomy 28).

6) Public Reading of Treaty: Provisions for a regular public reading of the treaty were also sometimes added, as in Deut. 31:10-13.

7) Covenant Meal: A covenant meal would sometimes be eaten to confirm the treaty. Exo. 24:9-11: Then Moses went up with Aaron...and seventy of the elders of Israel, and they saw the God of Israel; and under his feet there appeared to be a pavement of sapphire, as clear as the sky itself...and they ate and drank

Eze. 1:22,26: There was something like an expanse, like the awesome gleam of ice.... And above the expanse...there was a figure with the appearance of a man

Eze. 1:28: He is the appearance of the likeness of the glory of the Lord

Heb. 1:3: He is the radiance of his [God’s] glory and the exact representation of his nature...

Rev. 3:20: Behold, I stand at the door and knock; if anyone hears my voice and opens the door, I will come in to him, and will dine with him, and he with me.