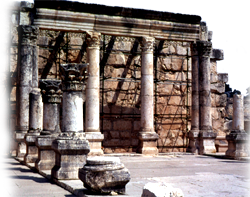 Some of the most vivid written memories of Jesus’ disciples are of time spent along the shores of the Sea of Galilee. This was before the crowds became large, when those listening could still fit in the cool, dark interior of the local synagogue. Here they had Yeshua (yeh-SHU-ah), as they called him in Hebrew, all to themselves, and could enjoy the personal and homey experiences of daily life together, as well as spectacular times of healing and ministry.

Home at this time was the small village of Capernaum (Mark 2:1, 3:20), pressed up against the sea, whose farmers worked most of the agricultural land along the Sea of Galilee’s northwest shore. The simplicity of life here is revealed by the humble homes uncovered by archeologists: the fieldstone walls at times dangerously narrow, the roofs a few branches overlaid with reeds and smeared with mud.* The floors, too, at least on the ground floor, were dried mud. By modern standards, the level of economic life was poor.

* This is why the friends of the paralytic had to dig through the roof to lower him down before Jesus (Mark 2:4).

Today, these excavated ruins sit empty and lifeless. But in Jesus’ day, the small streets were filled with voices and children playing, the creak of old wooden doors, the bustle of life in the courtyards and the rooms surrounding them.

The experience of daily living in a Jewish village comes to life in the writings of the Jewish rabbis. Religious and legal attention was focused on such small-town concerns as whether or not to tithe fruit on the branches of a tree hanging over an outer wall, whether grapes must be put in the wine press with clean or unclean hands, and exactly how many cubits from town a tanner was required to keep his business.*

* Tanners soaked hides in potent smelling vats that included ingredients like urine and excrement. For this reason the rabbis required that they be kept at least fifty cubits from town. This probably explains why Simon the Tanner’s house in Joppa was by the sea, instead of in town (Acts 10:6,32).

But small-town poverty was no hindrance to religion. Some of the most well-known rabbis came from a life of want. As a young man, Hillel, the most famous rabbi of the generation before Jesus, earned only half a denarius a day (half the usual minimum wage; see Matt. 20:2). Yet he spent half of this small income attending a House of Study (a Beth Midrash) to listen to the teachings of the rabbis. Once, when he didn’t have enough money, he climbed up to a window to listen.

Jesus, too, grew up in poverty. How do we know that? Forty days after his birth, Mary gave a pair of pigeons for her ritual purification. This was a less costly offering, permitted for the poor, rather than the lamb and a pigeon required of those more well-to-do (compare Luke 2:24 with Lev. 12:8). Nazareth, even more than Capernaum, was a humble place. As Nathanael said, Can any good thing come out of Nazareth? (John 1:46).

In Capernaum, when the collectors approached Jesus for the annual two drachma Temple tax*—one of the lesser taxes imposed on Jews at the time, he didn’t have it. Instead, he sent Peter to catch a fish with a coin in its mouth, just enough to pay the tax for the two of them (Matt. 17:24-27). The attempt of Jesus’ family to get him to leave the ministry and return home may have had as much to do with losing a primary wage earner as with religious disapproval (Mark 3:21,31-32).

* Also known as the half-shekel tax, equivalent to two day’s wages. From this tax, paid by Jews around the world, the sheep for the daily sacrifice and other regular expenses of the Temple were paid.

But unlike the rabbis, Jesus had a problem with wealth. Do not store up for yourselves treasures on the earth.... No one can serve two masters.... You cannot serve God and mammon (Matt. 6:19,24). This mammon of unrighteousness (riches; Luke 16:9,11), according to Jesus, creates an obstacle to following God’s will.*

* Mammon has been conveniently mythologized by some to refer to an otherwise unknown god of riches. But the clear meaning of the term in contemporaneous literature (Mishnah, Apocrypha, Dead Sea Scrolls) is property, riches, or wealth.

Jesus offered his solution to the problem of wealth to a young man (called a leader or official in Luke) that was seeking eternal life: Sell your possessions and give to the poor...and come, follow me (Matt. 19:21, Luke 18:18). Some have creatively interpreted this to be a special instruction given uniquely to this young man because of his wealth. But Jesus gave exactly the same instruction to all that would follow him: Any of you that does not give up all his possessions cannot be my disciple (Luke 14:33).

No wonder most of those who accepted Jesus’ message were poor: the am-haaretz as they were known—the ordinary, hard-working peasants that were despised by the Pharisees for their supposed spiritual weakness.* To them, and others like them, Jesus addressed the teaching, Blessed are the poor (Luke 6:20). Here Jesus captures one the great mysteries of human existence: that in spite of their many challenges, their struggles and daily difficulties, it’s often the poor children of the world that smile with the biggest smiles.

* The Pharisees thought they were not strict enough in obeying the rabbis’ interpretation of the Law of Moses.

This teaching hints back to the prophecies of Isaiah: To this one I will show regard: to the poor and stricken of spirit and trembling at my word (Isa. 66:2); and For this is what the high and exalted one says...I live in a high and holy place and with the contrite and humble of spirit (Isa. 57:15). By the time of Jesus, ascetic poverty had become a religious value, as can be seen in John the Baptist and the Dead Sea community at Qumran, associated with the Dead Sea scrolls. They were among the many living intentionally humble lives in the desert.* It might also be seen in Jesus’ friends living in Bethany, the name of which likely means house of the poor (Beth-oni [bait-ō-NEE] in Hebrew).** As Jesus said of his own itinerant lifestyle, The foxes have holes and the birds of heaven have nests, but the Son of Man doesn’t have any place he can lay his head (Matt. 8:20).

* In later years, after the time of Jesus, the rabbis vigorously resisted this ascetic tendency and eventually purged it from Jewish life.
** Mary, Martha, and Lazarus, who lived in Bethany, are not mentioned as having spouses. They may have been among the many celibates living in the desert for religious reasons. Though close to Jerusalem, Bethany sits on the far side of the Mt. of Olives where the desert of Judea begins.

By contrast, the stylish mansions of the Sadducees and priests in Jerusalem featured the latest fashions from Italy. They were built of expensive cut stone with stone floors, paid for by lucrative compromise with the pagan Romans. Woe to you who are rich! Jesus intoned against them (Luke 6:24). It’s easier, he said, for a camel to go through the eye of a needle than for a rich man to enter into the kingdom of God (Matt. 19:24). This eye of a needle has been conveniently mythologized by some to refer to a small wicket gate used to enter Jerusalem when the main gates were closed.* But Jesus’ true meaning, as he himself clearly states, was that entrance by the rich is not merely difficult; it is impossible—without the intervention of God (For men, this is impossible. But for God, all things are possible, Matt. 19:26, though see 1 Tim. 6:17-19).

* To enter which, it is said, the camels had to kneel down—implying that the rich must kneel down before God to enter his kingdom. But the historical gates of Jerusalem are well known. No such gate is ever mentioned in the historical sources, nor is there any archeological evidence for its existence.

But following Jesus does not mean giving up something for nothing. In the same passage about the wealthy young man, Jesus said, There is no one who has left house or brothers or sisters or mother or father or children or lands, because of me and because of the gospel, but that he will receive a hundred times as much now in this present time, houses and brothers and sisters and mothers and children and lands...and in the coming age eternal life (Mark 10:29-30). Sacrifice for Jesus brings a reward, both now and in the future. As Jesus said in the Sermon on the Mount, Seek first the kingdom of God and his righteousness, and all these things [food, drink, clothing] will be provided for you (Matt. 6:33). Or as he said before sending out his disciples, For the workman is worthy of his provision (Matt. 10:10).

This is far from the modern prosperity gospel, which preaches reward without the necessity of leaving all for Christ. Give us today our daily bread (Matt. 6:11), asks not for multiplied riches, but the meeting of vital necessity. It’s a hint back to the provision of manna in the desert: God’s provision in exactly the measure that was needed at exactly the time it was needed. It’s also an allusion to Proverbs 30:8-9, Provide me my portion of bread, which adds, Don’t give me poverty or riches...lest I be full, and deal falsely, and say, Who is the Lord? or lest I be poor, and steal, and seize [misuse, do violence to] the name of my God.

There is a scriptural balance with regard to money: wanting neither riches nor poverty, but trusting the Lord to provide every need. Unfortunately, many are teaching wealth as the true savior, and Jesus as the means to achieve it. But the Bible counters this false teaching, saying, Those who want to be rich fall into temptation and a trap and many foolish and harmful desires, that plunge people into ruin and destruction.... Flee from these things, you man of God (1 Tim. 6:9,11).*

* Even here, there is a popular misinterpretation of the intervening verse, For the love of money is the root of all evil things (1 Tim. 6:10). It is, they say, only the love of money that is a problem, not the money itself. But this has missed the point entirely. Money is not to be our goal at all: rather we are to pursue righteousness, godliness, faith, love, perseverance and gentleness, all of which are to take priority over money (1 Tim. 6:11). Seek first the kingdom, leave everything to follow Messiah. If not, we will find ourselves willing to compromise these and other Biblical values—such as justice for the poor—for a buck.

Jesus said we are to be perfect as your heavenly Father is perfect (Matt. 5:48). This doesn’t mean avoiding typing errors or singing perfectly on key. The Hebrew word Jesus used here is most likely tamim. The perfection it refers to is being blameless before God, with pure and perfect motives. This includes taking care to avoid sin, including the sin of greed (Luke 12:15, Rom. 1:29, Eph. 5:3, Col. 3:5). True prosperity comes not from riches, but from being set free from the pursuit of worldly things and serving Jesus with everything you have, following wherever he may lead (John 3:8). It’s the greatest adventure mankind can ever experience: walking with God into the unknown. Come follow me, Jesus said (Matt. 19:21). May we have the boldness to accept his invitation!