The Jewish Roots of Christianity

Beauty like the Olive:
Christianity and the Modern State of Israel

See notes below. (Sections in parentheses are covered in the longer form of this seminar and in the book version: available in print and on Kindle.)

Acts 1:11: This Jesus, who has been taken up from you into heaven, will come in just the same way as you have watched him go into heaven

Zech. 14:4,9: And in that day his feet will stand on the Mount of Olives, which is in front of Jerusalem on the east.... And the Lord will be king over all the earth

Is. 11:11-12: Then it will happen on that day that the Lord will again recover the second time with his hand the remnant of his people.... He will lift up a standard for the nations [the Gentiles] and will gather the banished ones of Israel, and will gather the dispersed of Judah from the four corners of the earth

The first return of the Jewish people to Israel was at the end of the Babylonian Exile under the leadership of Zerubbabel (c. 520 BC).

What was the second time God gathered the Jewish people to Israel?

Palestine: Name used for Israel during times of Gentile occupation or in areas of Gentile population. It traces back to the Philistines, whose name it preserves.

Mark Twain: An American writer (author of Tom Sawyer) who visited Palestine in the late 19th century. He wrote that Jerusalem was “mournful, dreary, and lifeless.... Palestine sits in sackcloth and ashes” (Innocents Abroad 53,56).

Eze. 34:11-14: For thus says the Lord God, ‘Behold, I myself will search for my sheep and seek them out. As a shepherd cares for his herd in the day when he is among his scattered sheep, so I will care for my sheep and will deliver them from all the places to which they were scattered on a cloudy and gloomy day. And I will bring them out from the peoples and gather them from the countries and bring them to their own land; and I will feed them on the mountains of Israel, by the streams, and in all the inhabited places of the land.’

Nazi party: German political party that seized power in 1933. Its policies of fascism, expansionism, and racism led to World War II in Europe and the destruction of six million Jews.

Mishling (Half-breed): Name given by the Nazis to those of mixed Jewish and Gentile descent. If even only one of your grandparents was Jewish, you were denied German citizenship.

Auschwitz: Death camp in Poland where millions of Jews were killed. 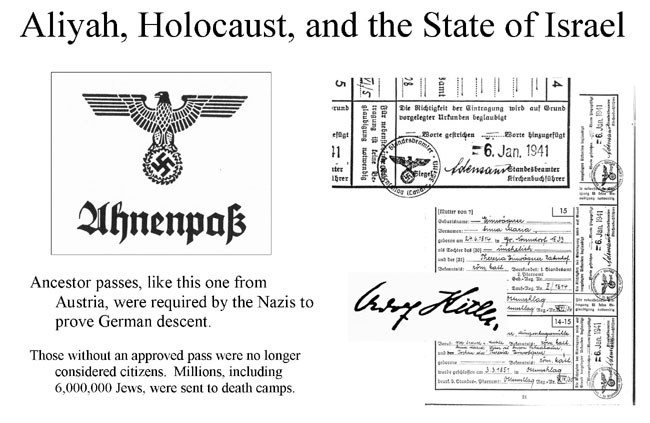 Eze. 37:1-2,11: The hand of the Lord was upon me, and he brought me out by the Spirit of the Lord and set me down in the middle of the valley; and it was full of bones. And he caused me to pass among them round about, and behold, there were very many on the surface of the valley; and lo, they were very dry.... Then he said to me, ‘Son of man, these bones are the whole house of Israel; behold, they say, Our bones are dried up, and our hope has perished. We are completely cut off.’

Eze. 37:3-10: And he said to me, ‘Son of man, can these bones live?’ And I answered, ‘Lord God, you know.’ And he said to me, ‘Prophesy over these bones, and say to them, Dry bones, hear the word of the Lord. Thus says the Lord God to these bones, ‘Behold, I will cause spirit [or breath] to come into you and you will come to life. And I will put sinews on you, and make flesh grow back on you, and cover you with skin, and put spirit [or breath] in you, and you will come to life; and you will know that I am the Lord.’’ So I prophesied as I was commanded; and as I prophesied, there was a noise, and behold, a quaking; and the bones came together, bone to its bone. And I looked, and behold, sinews were on them, and flesh grew, and skin covered them; but there was no spirit [or breath] in them. Then he said to me, ‘Prophesy to the Spirit, prophesy, son of man, and say to the Spirit, Thus says the Lord God, ‘Come, Spirit, from the four winds, and breathe into these slain, and they will come to life.’’ So I prophesied as he commanded me, and the Spirit came into them, and they came to life, and stood on their feet, a very very great army.

Basel: City in Switzerland. Site of the First Zionist Congress in 1897, under the leadership of Theodor Herzl.

Zionism: A political movement for the establishment of a national homeland for the Jews.

Aliyah: The “going up” (immigration) of Jews to Israel.

Balfour Declaration: Issued by the British government to express support for a Jewish homeland in Palestine.

Weizmann-Feisal Agreement (1919): Expressed mutual recognition by Jews and Arabs of each other’s rights in Palestine.

Hashemite Dynasty: An Arab dynasty from Saudi Arabia. Today it rules the nation of Jordan.

(The White Paper of 1939: Reversed Britain’s support for a Jewish homeland.

May 14, 1948: The date of the establishment of the modern state of Israel. The next day Israel was attacked by five Arab armies.

Isa. 66:8: Who has heard such a thing? Who has seen such things? Can a land be born in one day? Can a nation be brought forth all at once?

West Bank: Territory west of the Jordan River. Corresponds to the hill country of Judea and Samaria in the Bible.

Gaza Strip: Territory around the city of Gaza on the Mediterranean coast (see map below).

War of Independence: Israeli name for the 1948 war.

Six Day War: Israel was attacked again in 1967. Thanks to a preemptive strike by its air force, Israel won the war in six days.

Golan Heights: An uplifted plateau east and northeast of the Sea of Galilee. Known as Bashan in the Old Testament, and Gaulanitis in New Testament times (see map below).

Sinai: Triangular desert peninsula between Egypt and Israel. Here the children of Israel wandered for forty years under the leadership of Moses.

Suez Canal: A canal connecting the Mediterranean Sea and the Red Sea, used by ships traveling from Europe to Asia. The line of the canal marks the western edge of Sinai.

Isa. 11:14: They will swoop down against the flank of the Philistines on the west; together they will plunder the sons of the East; they will send away the hand of Edom and Moab; and the sons of Ammon will be subject to them. 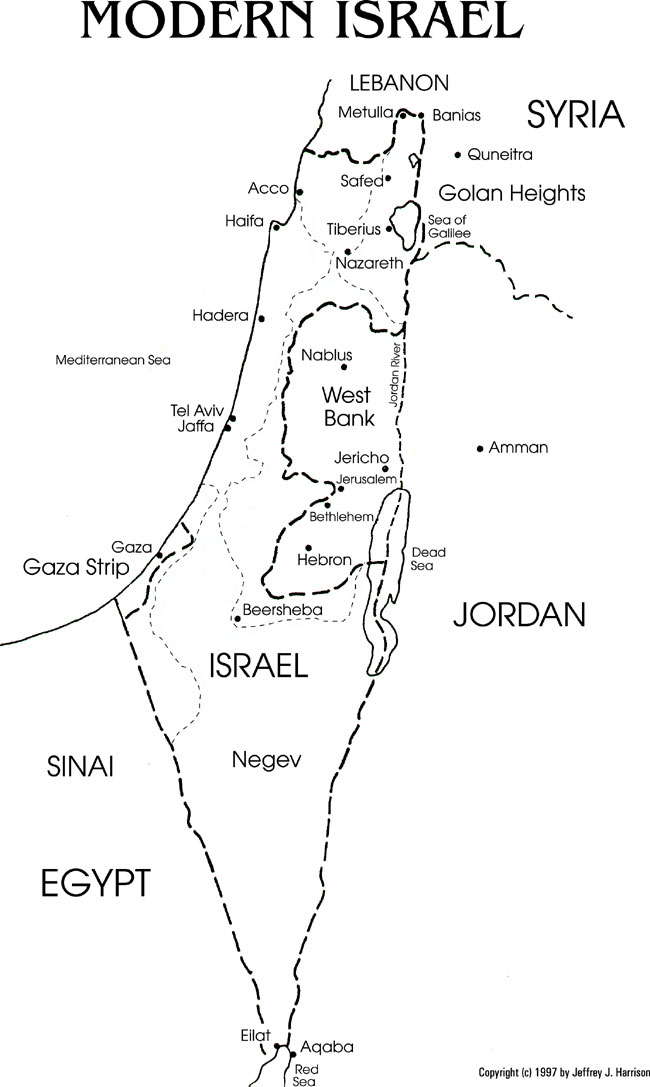 Yom Kippur War: On the Biblical Day of Atonement. Israel was attacked on Yom Kippur, Oct. 6, 1973.

Lev. 23:29: If there is any person who will not humble himself on this same day [the Day of Atonement], he will be cut off from his people.

Isa. 11:15: And the Lord will utterly destroy the tongue of the Sea of Egypt; and he will wave his hand over the River (the Euphrates) with his scorching wind.

Refuseniks: Russian Jews denied permission to emigrate to Israel and who were sent to Siberia.

Mountain Jews: Jews living in the Caucasus Mountains from the time of the Assyrian Exile (8th cent. BC).

Isa. 60:4,8-10: Lift up your eyes round about, and see: They all gather together, they come to you. Your sons will come from afar, and your daughters will be carried in the arms.... Who are these who fly like a cloud, and like doves to their lattices? Surely the coastlands [the Gentiles] will wait for me; and the ships of Tarshish [Gentiles] will come first to bring your sons from afar.... Foreigners will build up your walls, and their kings will minister to you...

Isa. 66:20: Then they [Gentiles] will bring all your brethren from all the nations as a grain offering to the Lord...

Christian Friends of Israel, Bridges for Peace, and the Christian Embassy: Three of many Christian organizations working in Israel to show support for the Jewish people.

FULFILLMENT OF PROPHECY IN MODERN ISRAEL

(Eze. 36:8-12: But you, mountains of Israel, you will put forth your branches and lift up your fruit for my people Israel; for they will soon come. For behold, I am for you, and I will turn to you, and you shall be cultivated and sown. And I will multiply men on you, all the house of Israel, all of it; and the cities will be inhabited, and the waste places will be rebuilt. And I will multiply on you man and beast; and they will increase and be fruitful; and I will cause you to be inhabited as you were formerly and will treat you better than at the first. Thus you will know that I am the Lord.

(Isa. 61:4,5: They will rebuild the ancient ruins, they will raise up the former devastations, and they will repair the ruined cities…. And strangers will stand and pasture your flocks, and foreigners will be your farmers and your vinedressers.

(Isa. 35:1: The desert and dry place will be glad, and the Aravah [the Rift Valley desert] will rejoice and blossom; like the crocus it will blossom profusely and rejoice with rejoicing and shout of joy.

(Isa. 27:6: In the days to come, Jacob will take root, Israel will blossom and sprout; and they will fill the whole world with fruit.

(Jaffa: Brand name of oranges and other fruit grown on the Coastal Plain of Israel. Named for Jaffa (Joppa), the port town from which Jonah sailed for Tarshish to escape the calling of the Lord.)

Eze. 36:24-27: For I will take you from the nations, gather you from all the lands, and bring you into your own land. Then I will sprinkle clean water on you [a cleansing from the impurity of death], and you will be clean.... Moreover, I will give you a new heart and put a new spirit within you.... And I will put my Spirit within you...

Jews for Jesus: Evangelistic movement of Jewish believers in Jesus.

Right of Return: The legal right of Jewish people to immigrate to the State of Israel.