Colonnade and Fisherman’s Hovel:
Galilee in the Ministry of Jesus


THE SEA OF GALILEE (Yam Ha-Galil) 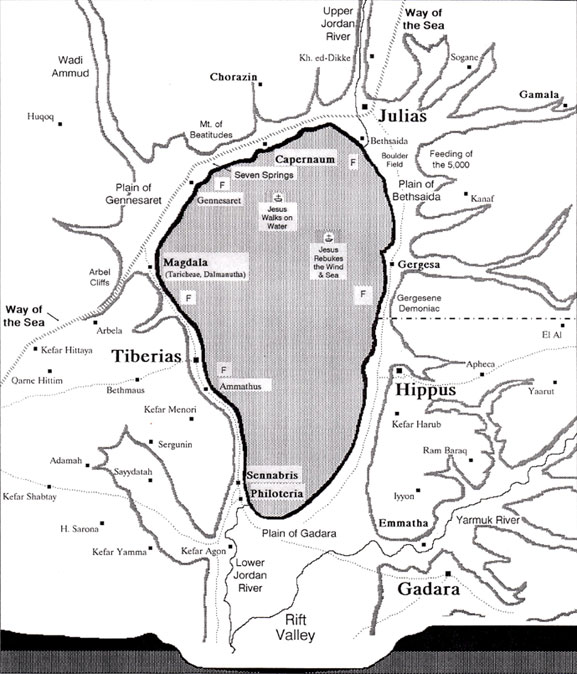 Sharkia: The Arabic name for storms coming from the east.

Mark 4:37-41: And there arose a fierce gale of wind, and the waves were breaking over the boat so much that the boat was already filling up. And he himself was in the stern, asleep on the cushion; and they woke him and said to him, Teacher, do you not care that we are perishing? And when he was aroused, he rebuked the wind and said to the sea, Hush, be still. And the wind died down and it became perfectly calm. And he said to them, Why are you so timid? How is it that you have no faith? And they became very much afraid and said to one another, Who then is this, that even the wind and the sea obey him?

Matt. 14:24-27: But the boat was already many stadia [a couple of miles] away from the land, battered by the waves; for the wind was contrary. And in the fourth watch of the night [3-6 am] he came to them, walking on the sea. And when the disciples saw him walking on the sea, they were frightened, saying, It is a ghost! And they cried out for fear. But immediately Jesus spoke to them, saying, Take courage, I AM, do not be afraid.

The Way of the Sea (Via Maris): The major trade route running north-south along the Sea of Galilee (Isa. 9:1).

Gentiles (G): Non-Jews. In Galilee, most were Greek-speaking pagans who worshipped idols.

Hellenized Jews (H): Jewish residents who were strongly influenced by Greek and Roman culture and society.

Traditional religious Jews (J): Jewish residents whose lives revolved around the Law and the synagogue.

THE ELEVEN LARGEST CITIES AND VILLAGES AROUND THE SEA

Naumachia: Naval battles presented as entertainment for the populace.

The rabbis taught: If any man saves the life of a single soul, Scripture imputes it to him as though he had saved a whole world (Mishnah, Sanhedrin 4:5).

#2: Tiberias (H + G): Founded by Herod Antipas in 18 AD, when Jesus was in his twenties. For many years religious Jews would not live there because a portion of the city was built over an old cemetery.

John 6:23: There came other small boats from Tiberias...

Gaulanitis (H): New Testament period name for the Golan Heights (Upper Gaulanitis) and the area just below the cliffs (Lower Gaulanitis). One of the territories of Philip, another of the sons of Herod the Great (Luke 3:1). Julias was the capital of Gaulanitis. Philip’s main capital was further north at Caesarea Philippi.

Discovery: A synagogue in Magdala from the first century, undoubtedly one of the synagogues in which Jesus preached.

Mark 1:39: And he went into their synagogues throughout all Galilee, preaching and casting out the demons.

Discovery: The Jesus Boat: a fishing boat from the time of Jesus found buried along the western shore of the Sea of Galilee near ancient Magdala.

#9: Gamla (J): Home of the Zealot resistance movement, the hometown of Judas of Gamla, also known as Judas of Galilee (Acts 5:37). Location of a famous battle during the First Jewish Revolt against Rome, in which thousands were killed.

#10: Capernaum (J): Jesus’ home base during his three years of ministry.

Matt. 11:21: Woe to you, Chorazin! Woe to you, Bethsaida! For if the miracles had occurred in Tyre and Sidon [totally ‘G’ pagan cities] which occurred in you, they would long ago have repented in sackcloth and ashes. Nevertheless I say to you, it will be more tolerable in the day of judgment for Tyre and Sidon than for you.

Mark 6:53-55: And when they had crossed over they came to land at Gennesaret, and moored on the shore. And when they had come out of the boat, immediately the people recognized him, and ran about that whole region and began to carry...on their pallets those who were sick to the place they heard he was.

Valley of the Seven Springs (Heptapaegon): Remembered as the location of Jesus’ appearance in John 21. Located immediately below the Mount of Beatitudes (location of the Sermon on the Mount).

1) The disciples were traditional, religious Jews, taught to separate themselves from other types of people.

Acts 10:28: You yourselves know how unlawful it is for a man who is a Jew to associate with a foreigner or to visit him

Matt. 5:16: Let your light shine before men in such a way that they may see your good deeds and glorify your Father, who is in heaven

Acts 10:14: By no means, Lord, for I have never eaten anything unholy and unclean

Acts 10:28: God has shown me that I should not call any man unholy or unclean.

2) They were raised to be anti-Roman.

3) They were attracted to apocalyptic (revelatory) Judaism, like that of John the Baptist.

4) They were not typical rabbinical students.

Mark 2:1: And when he had come back to Capernaum...it was heard that he was at home.

Kephar Nahum (the village of Nahum in Hebrew)