Notes for Video 3a:

Song of Solomon 2:1: I am a daffodil [or asphodel, often translated rose] of the Valley of Sharon [literally, of the Sharon], a lily of the valleys.

Correction: The cross section at the bottom of the map on this page is brown: light brown is above sea level, dark brown is below sea level.

Rift Canyon (Aravah Valley, Jordan Valley): A deep canyon between parallel earthquake fault lines. It includes the Dead Sea at about 400 m (1,300 ft) below sea level, the Sea of Galilee at about 210 m (690 ft) below sea level, and much of the Jordan River. (The Rift Valley in Israel is part of the Great Rift Valley that runs from Syria in the north to Mozambique in the south.)

Rain Shadow: An area of little rainfall behind certain mountain ranges. The Judean Desert is the result of a rain shadow.

Update: The population of Israel as of 2017 was 6.5 million Jewish residents, 1.8 million Arabs, and .4 million others for a total of 8.7 million. This does not include Arab residents of the West Bank and Gaza Strip. 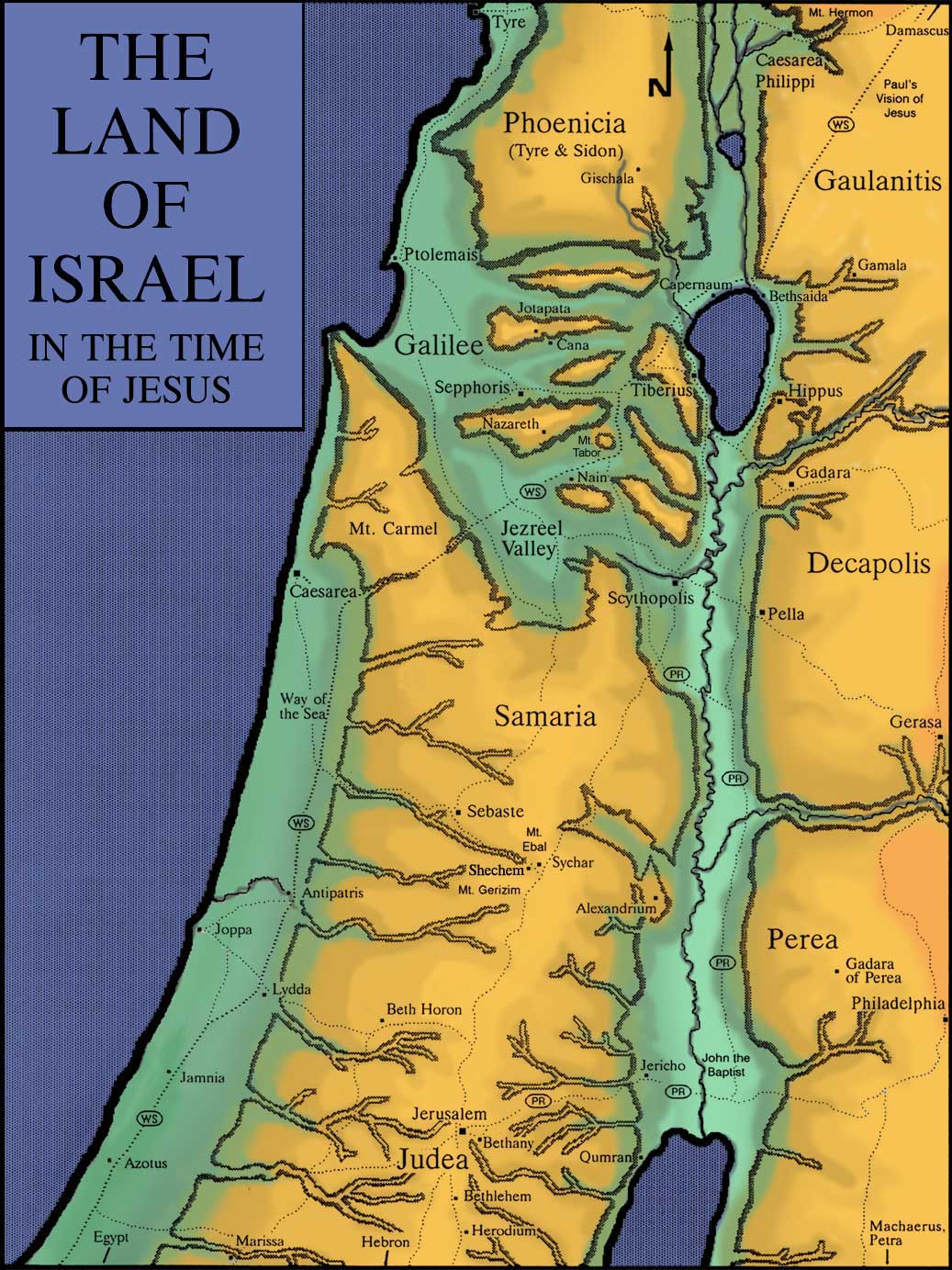 Notes for Video 3b:

Jericho:  Located down in the Rift Valley near the place where Jesus was baptized by John.

Pilgrim Route:  The route taken by Jewish pilgrims from Galilee on their way to Jerusalem. Marked PR on the map.

Jerusalem-Jericho Road: Mentioned by Jesus in the Parable of the Good Samaritan (Luke 10:30-37).

Psalms of Ascent: Psalms traditionally sung by the Jewish people as they ascended to Jerusalem for the annual feasts (Psalms 120-134).

Luke 2:41: His parents used to go to Jerusalem every year at the Feast of Passover

Luke 2:44: But supposing him to be in the group, they went a day’s journey and were looking for him among their relatives and friends.

Luke 2:46: And it came about that after three days they found him in the Temple...

Luke 2:52: And Jesus increased in wisdom and maturity, and in favor with God and men.

Bethany (Beth Aniyah, House of the Poor): Home of Mary, Martha, and Lazarus.

Samaritans: In a continual state of low-level conflict with the Jewish people. Considered unclean by the rabbis.

Luke 10:29-30: And who is my neighbor? In reply, Jesus said, A certain man was going down from Jerusalem to Jericho, and he fell into the hands of thieves...

Mt. Ebal and Mt. Gerizim:  Location of the Blessings and Curses in the time of Joshua (Jos. 8:30-34; Deut. 27:1-). Nearby, at the foot of the mountains, is Jacob’s well and the location of the village of Sychar.

Update:  The church over Jacob’s well is now complete. It is a Greek Orthodox church dedicated to St. Photina, the name given to the Samaritan woman by Orthodox tradition.

The Taheb (the Restorer): The Samaritan name for the Messiah.

Sebaste: Name in the New Testament period of the ancient city of Samaria, the old capital of the northern kingdom of Israel.

Caesarea by the Sea (also known as Caesarea Maritima): The political capital of Judea and Samaria in the time of Jesus. Here, the Holy Spirit was first poured out on Gentiles in Acts 10.

Way of the Sea: The most important trade route in Israel going from Egypt in the south to Damascus in the north. Marked WS on the map.

Galilee of the Gentiles:  A nickname given to Galilee because of the many Gentiles living in the area and passing through on the trade routes (Isa. 9:1).

Sepphoris: The capital of Galilee when Jesus was a boy. The market town of Joseph and Mary.

Decapolis: A group of Greek-style cities with Greek-style government. Many of the residents, who spoke the Greek language, were descendants of immigrants from Greece and Macedonia. The Decapolis cities included Pella, Scythopolis (Beth-Shean), Gadara, Hippus, Gerasa, and Philadelphia (today’s Amman).

Gaulanitis: Ancient name for the area of the Golan Heights.

Mt. Hermon: The largest mountain in Israel: 9,200 ft (2,800 m) above sea level. Snow-covered for several months each year. Caesarea Philippi sits at its base facing an area of high, rocky cliffs.

Matt. 16:16: But Simon Peter answered and said, You are the Messiah, the Son of the living God.

Phoenicia: The territory referred to in the Bible as Tyre and Sidon (Matt. 15:21). These two Greek-style cities were two of several Gentile cities running along the Mediterranean coastline near Jewish areas.

Census: A Roman census was used to determine the taxes for a province. The census when Jesus was about ten years old led to the revolt of Judas the Galilean (Acts 5:37).

Caravansery: A Middle Eastern inn with open rooms around a central court.

Luke 2:7: She wrapped him in cloths, and laid him in a feeding trough, because there was no room for them in the guest chamber [katalyma].

Luke 10:34: But a certain Samaritan, who was on a journey...bandaged up his wounds...and brought him to an inn [pandokeion]

Discovery: The homes in Jewish villages in the time of Jesus were multi-family compounds built around a central courtyard.

Insula: A multi-family compound with a central courtyard, an outer perimeter wall, and a guest room (a guest chamber).

The traditional place of Jesus’ birth: an ancient rock-cut basement of the kind used for stables and storage in the time of Jesus. Located today beneath the altar of the Church of the Nativity in Bethlehem.

Discovery: Dozens of stone feeding troughs (mangers) from the time of the Bible.