Before the Flood, Noah, and Babel

Giant mammals included the giant ground sloth, the giant rhino, and others.

DATE OF THE CREATION

Saxon and Welsh chroniclers, using ancient pagan genealogies, figured the date of the Creation at 5193 BC.

The ancient Irish, who preserved similar ancient genealogies, put the date of the Creation at about 4000 BC.

The ancient Maya in South America put the beginning of this current age in a world-destroying catastrophe of water at 3113 BC, which is remarkably close to the Biblical date of the Flood.

MEMORIES OF THE FLOOD

The Babylonian Gilgamesh Epic: Includes a Babylonian version of the Flood story.

Utnapishtim: The Babylonian name for Noah.

Seven common elements in world-wide Flood stories: 1) This was a Flood that flooded the entire earth. 2) The Flood took place because of the disobedience of mankind, except 3) for one tiny group of people, usually a single family, that did not disobey. 4) One man of this family was warned in advance of the coming Flood. 5) This small group were the only ones to survive the Flood. 6) They survived by floating in the water, often on a single boat (though sometimes by going to the top of a very high mountain). 7) From this tiny group, the entire earth was repopulated.

Other preserved elements include: 1) That the Flood was caused by waters coming from under the earth (the fountains of the great deep in Gen. 7:11), 2) that exactly 8 people survived, 3) that the survivors save animals along with themselves, 4) that these animals are brought in pairs, 5) that the boat comes to rest on a high mountain, 6) after which a test is done to see if the waters have dried up, often using birds, 7) that a rainbow is associated with the story.

Claims that the ark could still be seen were made not only by Josephus the Jewish historian, but by Berosus the Chaldean, and Nicolaus of Damascus, plus dozens of ancient Christian and Muslim writers. 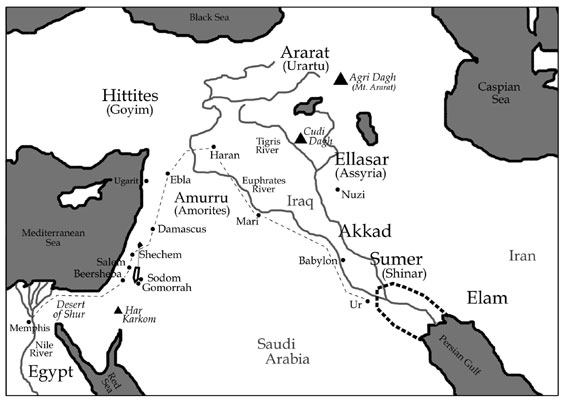 Gen. 8:4: The ark rested on the mountains of Ararat

Urartu: The ancient region of Ararat, north of ancient Assyria.

The Ararat Anomaly: An ark-shaped object spotted on top of Mt. Ararat.

Cudi Dagh: Mountain in southeastern Turkey associated with the Ark before the 12th cent. AD. Ancient Christians built a monastery on the summit called the “Monastery of the Ark.”

The Covenant with Noah was intended to prevent the situation that brought the Flood from ever happening again.

THE BIBLICAL LAWS OF NOAH

3) The penalty for murder of a human being by either man or beast is death, a penalty to be executed by human beings (Gen. 9:5-6).

Acts 15:20: ...that they avoid the defilements of idols and fornication and what is strangled and blood

Gen. 11:2: And it happened in their journeying in ancient times that they found a valley in the land of Shinar (Sumer), and they lived there

Gen. 11:1: And all the earth was of one language and the same words

At Shinar or Sumer is the first evidence of writing and literature, of law, of city-states, of the potter’s wheel, the sailboat, the plow, metalworking with bronze, of advanced musical and architectural forms, of weaving, leatherwork, and masonry.

Gen. 11:4: Come, let us build for ourselves a city and a tower and its top will be in the heavens...

Ziggurat: Name of the temple towers or stepped pyramids of Mesopotamia, of which the Tower of Babel was the earliest example. Babel (Bab-illu): Bab = gate, illu = of the gods.

Gen. 6:2: The sons of God saw that the daughters of men were beautiful; and they took wives for themselves

Nimrod: Biblical figure associated in popular imagination with the Tower of Babel (Gen. 10:8-9). Credited with the origins of warfare, idolatry, magic, astrology, and human sacrifice.

Both modern and ancient history trace astrology and certain kinds of magical divination back to ancient Babylon, as well as the development of idolatry into a politically powerful institution. It has also been connected with the origins of human sacrifice and ritual prostitution.

The evolutionary view of the origin of human language claims that languages started out very simple, as a series of grunts, and got increasingly more complex over time, as human society grew more and more complex.

The truth about language is that the oldest known languages are the most complex—even the languages of supposedly primitive tribal peoples, while modern languages spoken in advanced societies have been considerably simplified over the years.

THE SPREAD OF BABYLONIAN RELIGION

Early Bronze Age: Marked by the appearance of elaborate defensive fortifications around cities. This is what archeologists and historians have long called the origin of civilization: walled cities to protect you from the murderous attacks of other civilized people.

The oldest pyramids in Egypt are step-pyramids (at Saqqara and Maydum.)

Sumerian and Babylonian ideas that still affect us today: the 12 zodiac signs, the 360° circle, the 60 minute hour, and the 24 hour day.

Astrology today is based not on where the stars actually appear in the sky today, but on how they appeared more than 4,000 years ago.

Other common elements of Babylonian world religion include: a fascination with the stars and planets, astrology, human sacrifice, and idolatry.