Before the Flood, Noah, and Babel

Great Discoveries of the Bible Lecture #1b ⇨

INTRODUCTION TO CHRONOLOGY AND ARCHEOLOGY

“Archeology is the science of digging a square hole and the art of spinnin’ a yarn [making up a story] from it” (Anson Rainey).

Archeology gathers information by digging pits in the ground and making a careful record of what it finds. But it doesn’t discover cultures, periods of time, or history: it finds old things and dirt. The archeologist assigns ages, dates, and periods to the discoveries based on his own ideas or ideas popular among archeologists at the time.

History requires a human observer in the past to record what happened. Archeology can only observe objects in the present—the way they appear today.

Ritual object: A label often used by archeologists for an unusual object, the use of which is unknown.

Material culture: The physical remains of an ancient society. 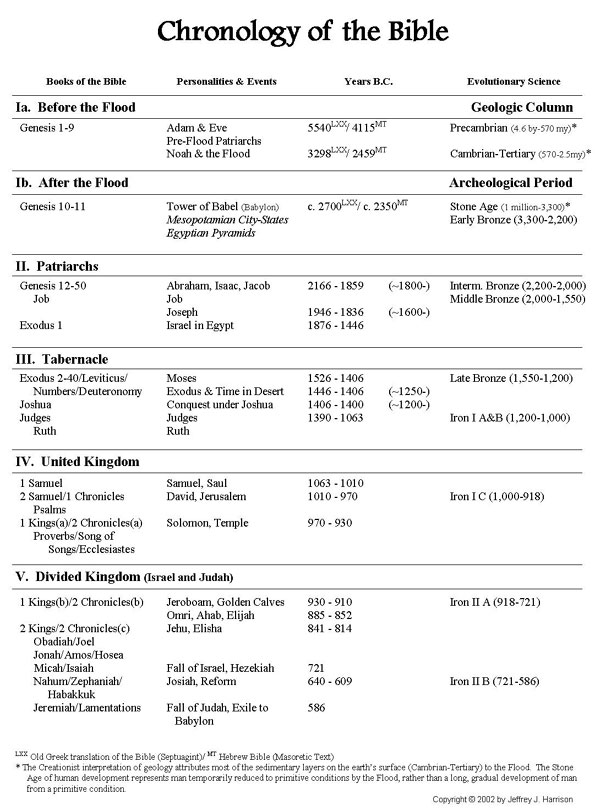 Radiometric dating: Any of several dating techniques that measure the relative amounts of radioactive isotopes.

Circular reasoning: Reasoning from one unproven assumption to another. It proves nothing.

Notes for Video 1b:

Most methods of dating the earth give dates between only 5,000 to 10,000 years old. These include measurements of elements in the oceans of the world.

Dinosaur bones have been carbon dated to only thousands of years old. (Usually dated to 30-40,000 years using secular dating techniques. The date is even lower if Creationist assumptions are used instead.)

Unfossilized dinosaur bones have been found by both creationist and evolutionist teams, originally in Alaska, but now in many other places as well, including museum collections.

Lava flows only a hundred years old give radiometric dates in the millions of years.

Egyptian artifacts for which we know the date from history give carbon 14 dates hundreds of years older than they actually are.

Layers in the Grand Canyon do not date in the proper age sequence (which should be older at the bottom, younger on top).

The Stone Age (Creationist view): Represents not primitive types of men over a long period of time, but men like us reduced to a primitive lifestyle by the catastrophe of the Flood. Very few human remains have been found, which matches a Biblical (short), rather than an evolutionist (long) Stone Age.

The Santal people of India: Preserve the memory of Thakur Jiu, the Creator God, whom they used to worship.

The Chinese: Preserve the memory of Shang Ti, the “Lord of Heaven,” the Creator God that they originally worshipped. This worship took place without idols, and with sacrifice on an altar like Noah or Abraham.

The Sky-God belief: The name anthropologists have given to belief in a Creator God associated with the sky.

The Mbaka of the Central African Republic: Believed that Koro, the Creator God, sent his son with an important message to mankind. They were waiting for white-skinned men to bring them that message—which happened when missionaries arrived.

The Lahu of Burma: Were waiting for white men to appear and teach them from a white book about Gui’ Sha, their name for the Creator God.

The evolutionary view of religion claims that religion began as the worship of natural forces—of thousands of little, local spirits in streams and trees. This evolved first to a belief in a small number of “high gods,” and finally to a single unified god in the most advanced societies.

The truth about religion is that people around the world started with a belief in a single Creator God, and this belief degenerated over time into the worship of a multitude of gods and spirits. (Wilhelm Schmidt, a German scholar, has published 4,000 pages of evidence of this original monotheistic belief among hundreds of native tribes.)

THE GARDEN OF EDEN

The Miautso people of China: Preserve until this day the genealogy of their tribe going all the way back to Adam.

Gen. 3:24: And in front of the Garden of Eden he put the cherubs and the flame of the whirling sword to guard the way to the tree of life.

Worship of trees: May in some places preserve a degenerated memory of the Tree of Life: as among the Canaanites, the Mayans, and the Germans (Irminsul).

The Karen tribe of Burma: Worshipped the Creator God, Y’wa. Y’wa made Tha-nai and Ee-u (the first man and woman) and put them in a garden. And he forbid them to eat from one of the trees of the garden. But Mu-kaw-lee (Satan) deceived them and convinced them to eat the forbidden fruit. From that time on, their ancestors became servants of Mu-kaw-lee.

On the city gate of Babylon (the Ishtar gate), there were images of a snake with legs (a dragon), which they worshipped as their chief god (Marduk).

In the ancient apocryphal story of Bel and the Dragon, Daniel proves that the dragon they worshipped in Babylon—some kind of living, dinosaur-like animal—was not a god by feeding it lumps of tar, fat, and hair until it died. “And in that same place there was a great dragon, which the people of Babylon worshipped.... Then Daniel took pitch, and fat, and hair, and mixed them together... this he put in the dragon’s mouth, and when he ate it, the dragon burst open. And (Daniel) said, ‘Look at what you worship’” (Bel 23, 27).

Gen. 3:14: And the Lord God said to the serpent, Because you have done this, you are cursed more than any animal and more than any living being of the field. On your belly you will go and you will eat dust all the days of your life.

Gen. 1:21: And God created the great sea monsters [the tanninim].

Coelacanth: A fish that supposedly died out 70 million years ago, but is still alive today.

Living Fossils: Plants or animals once claimed to be extinct by the evidence of the fossil record, but which have been found alive and well.

Job 40:15-: Behold now Behemoth...his strength is in his loins, and his power in the muscles of his belly. He bends his tail like a cedar tree... His bones are tubes of bronze, his bones are like bars of iron... For the mountains lift up food to him...

“But let no one, on comparing the lives of the ancients with our lives, and with the few years that we now live, think that what we have said of (their long lifespans) is false.... I have for witnesses to what I have said all those that have written antiquities, both among the Greeks and barbarians; for even Manetho, who wrote the Egyptian History, and Berosus, who collected the Chaldean [Babylonian] Monuments, and Mochus and Hestiaeus, and besides these, Hieronymus the Egyptian, and those who composed the Phoenician History, agree to what I here say; Hesiod also, and Hecataeus, Hellanicus, and Acusilaus; and besides these, Ephorus and Nicolaus relate that the ancients lived a thousand years....” (Josephus, Antiquities 1.107-8).

Dragonflies once had a 3 foot wingspan. Cockroaches grew to 1 foot in length. Some millipedes were longer than a human leg. Mayflies had a 3½ inch wingspan.