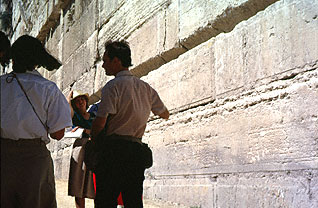 Clean and Unclean
The Chariot
The Temples that Jerusalem Forgot (Review)

Unlocking the Secrets of the Temple Mount

A two-part article by David Jacobson appearing in Biblical Archeology Review in the July/August and September/October issues of 1999.

Jeff’s response to Jacobson’s theory was published in the January/February 2000 issue of Biblical Archaeology Review in Queries & Comments on p. 63. The points made in this response were vindicated and enlarged on in an article by Leen Ritmeyer in the March/April 2000 issue.

David Jacobson’s two-part article was an interesting read, and I’m delighted to hear what he has to say, as well as to see the 19th-century photos showing a previously ignored monumental stairway (“Sacred Geometry—Unlocking the Secrets of the Temple Mount,” July/August and September/October 1999). But I must say I’m unconvinced.

Mathematical relationships are nice, but there’s no guarantee they were used unless there is physical evidence. The extension of the eastern wall [of the Temple] in the north proves nothing in light of the more than 15-foot-high bedrock scarp in the northwest corner of the Temple Mount. This scarp is definitive proof that the northern wall [of the Temple] did not go where Jacobson says it did. His explanation that the Antonia Fortress occupied the area weakens his mathematical theory and does nothing to explain the placement or the orientation of that scarp. He also makes no attempt to explain the northernmost stretch of the western wall that juts out slightly to the west [visible in the Western Wall Tunnels], breaking the line of the wall, and further weakening his mathematical theory.

Regarding the center of the Temple compound, Jacobson’s arguments are equally weak. He places the monumental stairway just inside the soreg [the wall separating areas accessible to Jews and Gentiles], but this requires the hel (the terrace) of the Temple, to which the stairs presumably led, to be much, much larger than is mentioned in the Mishnah, which says it was only 10 cubits wide. The other alternative would be to move the inner courts further south, but this would destroy his identification of al-Sakhra with the Holy Place (sanctuary).

Jacobson’s scheme just doesn’t work, which is probably why all the different elements of his theory were not included in the final illustration of the second article. The editor was forced into the weak explanation (in the caption) “that [perhaps] the monumental steps were not needed on all sides because of inconsistencies in the level of the bedrock.” A more accurate explanation for their omission is “because of inconsistencies in the author’s argument.”

Yes, the monumental stairway was probably part of a temple, but not the Temple of the God of Israel—rather the temple to Jupiter built by Hadrian in about 135 A.D.

To read Leen Ritmeyer’s critique of Jacobson’s theory, visit https://www.baslibrary.org/biblical-archaeology-review/26/2/7. Leen is also critical of Ernest Martin’s theory about the Temple being located above the Gihon Spring. To read our critique of Martin’s book, see The Temples that Jerusalem Forgot.