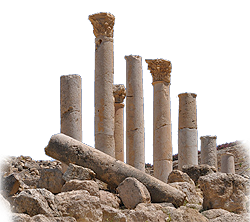 Ruins at Pella in Perea

The Law of the Messiah
Jesus

As Jesus and his disciples made their way to Jerusalem, there was excitement in the air. Huge crowds gathered to listen to him, more than they’d ever seen before (Matt. 19:1-2). So many tens of thousands came to listen that Luke says they were stepping on each other (Luke 12:1). Many were convinced Jesus was the Messiah, the anointed ruler that would bring deliverance from the Romans. Earlier, some had even tried to make him king in Galilee (John 6:15).

Now, as they traveled along, others joined them in their belief (John 10:42). They were hoping to see a mighty act of God that would restore their independence from Rome, and set a Messianic king on the throne in Jerusalem.

Jesus and his followers were not alone on the journey. They had joined the thousands of others that were traveling to Jerusalem to celebrate the Feast of Passover. The approach of the festival, with its message of deliverance from slavery, filled the air with hope for deliverance from their current enemies—a deliverance they hoped the Messiah would soon bring (They supposed the kingdom of God was going to appear immediately, Luke 19:11).

Their route took them along the old pilgrim road east of the Jordan River.* This brought them through one Jewish village after another set down below the steep eastern slopes of the rift valley through which the Jordan River runs.**

* This was the territory of Perea, also known as Beyond the Jordan. It was a largely Jewish territory, located in what is today the nation of Jordan.
** This valley, known in the Hebrew Bible as the Aravah (sometimes translated plain, Num. 22:1, 26:3, Josh. 3:16, Isa. 35:1, etc.) is today known more commonly in this northern section as the Jordan Valley.

The excitement of an impending Messianic kingdom gave immediate relevance to the disciples’ ongoing debate about which of them was the greatest—a debate that began in Galilee (Mark 9:34, Luke 9:46), continued on the road to Jerusalem (Mark 10:35-41), and even broke out again at the Last Supper (Luke 22:24). For the disciples of a well-known rabbi, this was not an unusual topic. Jonathan ben Uzziel, for example, was considered the greatest disciple of the famous Rabbi Hillel, while Johanan ben Zakkai was considered the least.*

* Sukkah 28a; Judah Nadich, The Legends of the Rabbis, vol. 1, Jason Aronson, Northvale, NJ, 1994, p. 209. Rabbi Hillel was the most famous rabbi of the generation before Jesus.

The desire to attribute greatness to the disciples of Hillel was sometimes taken to wild extremes: Thirty were worthy enough that the Divine Presence should rest upon them as it did upon Moses; thirty were worthy enough that the sun should stand still for their sake as it did for Joshua ben Nun.* This is the same spirit of religious pride that Jesus criticized when he said of the Pharisees, They do all their deeds to be noticed by men...they love the place of honor at banquets, and the chief seats in the synagogues, and respectful greetings in the market places (Matt. 23:5-7). Yet his own disciples were enticed by the same spirit.

On the last part of their journey, as they neared Jerusalem, the mother of James and John came to Jesus with her sons (Matt. 20:20). The original language says that she prostrated herself (proskeneutha) on the ground before him, the traditional Middle Eastern gesture of submission. Her request was straightforward: that her sons would sit at his right and at his left (Matt. 20:21). This was not just a request for good seats at dinner. Those sitting at the ruler’s right and left had the highest positions of authority in the kingdom.

Jesus’ reply exposed the vast gap between his hopes and theirs. You don’t know what you’re asking. Are you able to drink the cup that I am about to drink? (Matt. 20:22). They probably assumed he was talking about fighting the Romans. So they replied with confidence, We are able (Matt. 20:22). But Jesus was speaking of the suffering he was about to experience on the cross.

When the other disciples heard about this request for favor, they were upset (Matt. 20:24). Why? They, too, were hoping for positions of honor and power.

With such dramatic expectations, it’s no wonder that when Jesus spoke of his coming crucifixion, it fell on deaf ears: They didn't understand this saying...and they were afraid to ask him about this (Luke 9:45). One of these prophecies had been given just before the mother of James and John made her request (Matt. 20:17-19). But they had missed the point entirely.

The same is true today. So many want to make a name for themselves in ministry. They want to be rich and famous. Pastors evaluate one another by the size of their congregations and their level of income. Serious ministries are those with big budgets and television exposure. Others argue about who is an evangelist and who is an apostle. We’re expected to be impressed when we hear grandiose titles like Apostle to Asia or Apostle to the Nations. The traditional churches play the same game. The pope has long called himself his apostolic holiness. Even the secular media debates which pope was the greatest pope of the century.

So Jesus took them aside to explain that God has a different plan for leadership in the kingdom of heaven (Matt. 20:25-27). First, he identified the usual politics of power: that rulers lord it over their subjects, and great men tyrannize those around them (exercising authority in a negative sense, Matt. 20:25). But in God's kingdom, he said, whoever wants to be great among you will be your servant, and whoever wants to be first among you will be your slave (Matt. 20:26-27). The system of government in the kingdom of Messiah is to be the reverse of the way of the world. Those who are great in the kingdom of God are not those who amass the most power or are the most puffed up with pride. True greatness is found in the most humble, who lay aside their own interests to actually serve those around them.

This is the context of Jesus’ love commandment, which he addresses to his little children (John 13:33). We are to love one another just as I have loved you (John 13:34). We are to love freely, the way children love. We are even to love our enemies (Matt. 5:44). How is that possible? Only through humility. We must give up our fleshly pursuit of greatness, and instead pursue a life of service.

This is exactly the opposite of the world’s way of doing things. Those who serve and care for others are often looked at as fools by the world, to be taken advantage of and despised. Even in the Christian community, people are always running after ministries that are abusive and worldly, boasting of riches and power. But instead, Jesus says, we should look for leaders that have a servant’s heart: humble ministers of the gospel that are looking for no earthly reward.

See that you don’t despise one of these little ones, he said (Matt. 18:10). And why not? For I say to you that their messengers in the heavens always see the face of my Father in the heavens (Matt. 18:10).* Even the least of God’s children has a representative with access to the Father. Would you like God to receive your prayers with favor? Then we must humble ourselves like little children.

* This is a reference to angelic messengers. To see the face means to be received with favor, as in Gen. 33:10: I see your face as one sees the face of God, and you have received me favorably. By contrast, when God hides his face, it means that he does not receive a request: Do not hide your face from me...do not abandon me or forsake me, Psa. 27:9).

When Messiah returns, many of those who now seem great will be forgotten, and many who seem unimportant now will be shown to be truly great. As Jesus put it, Many of the first will be last; and the last first (Matt. 19:30). Jesus didn’t just ask us to call ourselves humble servants of God, but to actually serve, to put our lives on the line as he did, for the sake of others (Matt. 20:28).

Do you have a servant’s heart, with childlike faith? Or has it been tarnished over the years? Some of us have been hurt by fellow Christians or Christian leaders, which has made it harder to trust. Some of us have become weary in serving God or disappointed by events in life. Perhaps God didn’t answer a prayer in the way we thought he should have. But Jesus says that a childlike trust and faith is necessary to enter into eternal life (Matt. 18:3).

How do we get that childlike humility back again? First we need to know it’s important. Then we can ask God to show us whatever it is that’s come into our lives to steal it away. Then we need to release those hurts or worries and concerns to him. We must ask Jesus to heal us, to restore the childlike wonder to our lives. If we do, it’s a request we can be sure he will receive with favor.

For the disciples, all their hopes of glory came crashing down at the cross. Yet in that moment of crushing humility, they found the true meaning and purpose of their lives. And as they continued to walk in that humility, they experienced heights of glory they could never have achieved through any earthly power. May God help us to imitate their example.