Israelites Going into Exile to Assyria

The Laws of Noah

Gentile Christians
The Ten Tribes of Israel
The Laws of Noah

The Ten Lost Tribes of Israel

For more than two thousand years, the Ten Lost Tribes of Israel have been a favorite topic of imaginative speculation. Groups from nearly every continent and race have been identified with the Ten Tribes.* (See the map below, Myths, Legends, and Traditions about the Ten Tribes.) The reason for all this interest is a set of prophecies in the Bible that the Ten Tribes will one day return from their exile and be restored to their Jewish brethren, an event associated with the coming of the Messiah. But the many strange ideas that have grown up around the Ten Tribes should not distract us from their importance in Biblical prophecy, and their importance in understanding the Jewish roots of our faith.

* One recent teaching, Messianic Israel, also known as the Two House Movement, identifies the Ten Tribes with Christians of European descent. Its adherents call themselves Ephraimites or Israelites. Their teachings are a revival of Anglo-Israelitism, which claims that the British and the Americans are direct descendants of the Ten Tribes. Another group promoting this belief in recent years was the Worldwide Church of God founded by Herbert W. Armstrong. 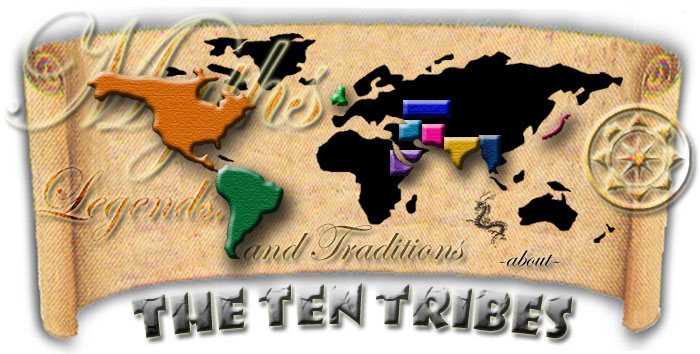 Click on the colored sections of the map above
to learn more about the Ten Tribes. 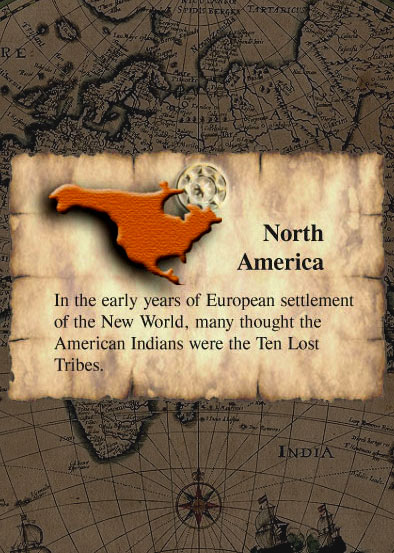 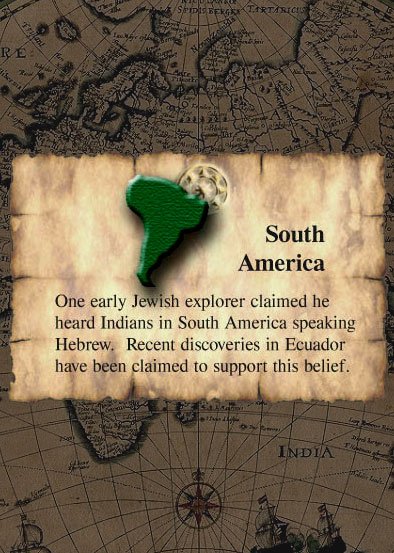 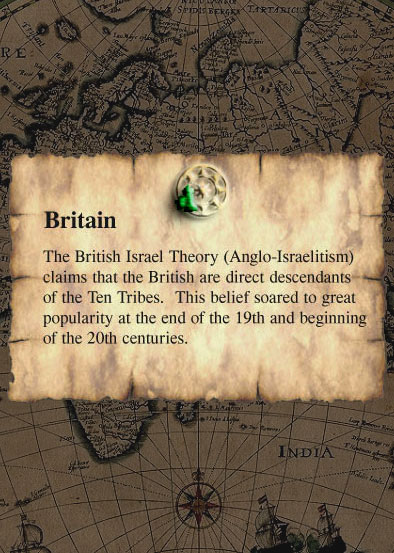 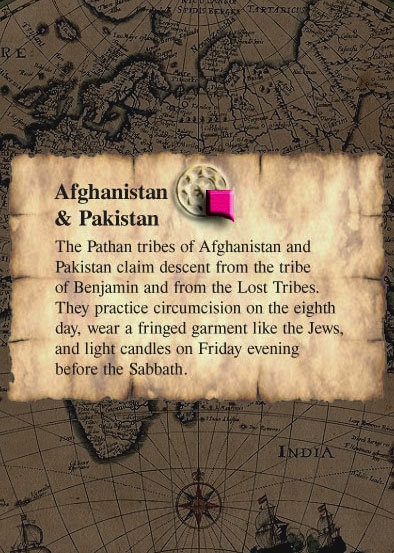 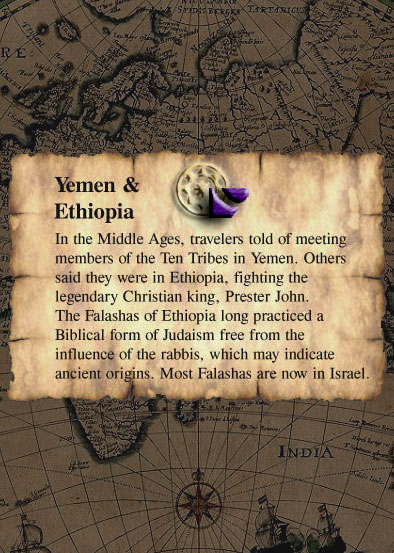 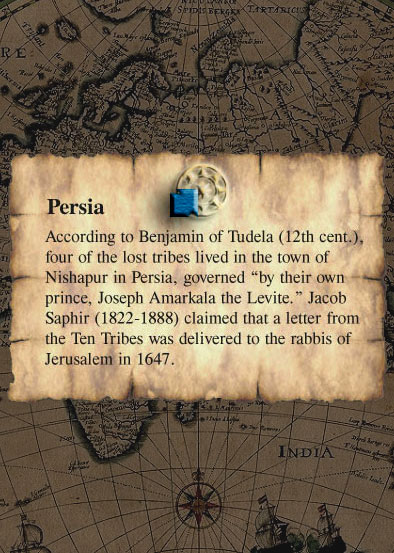 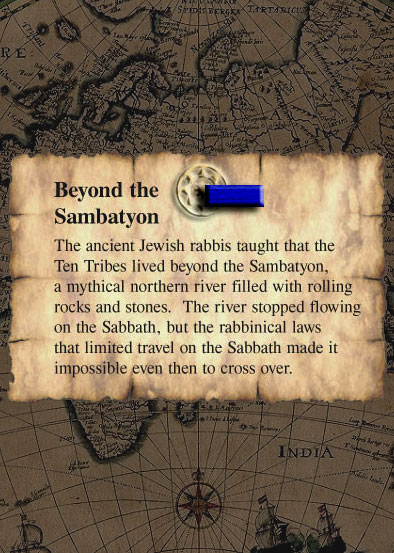 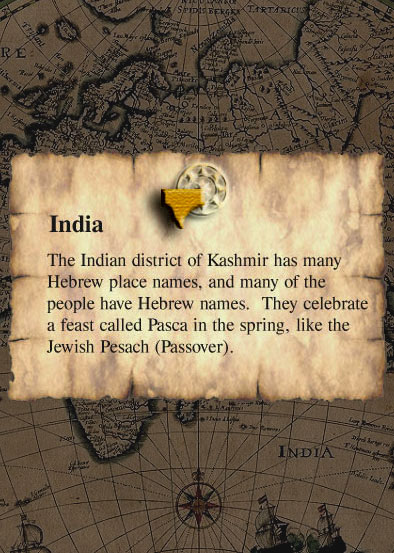 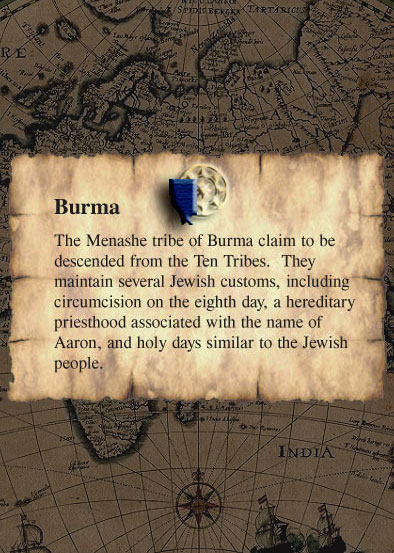 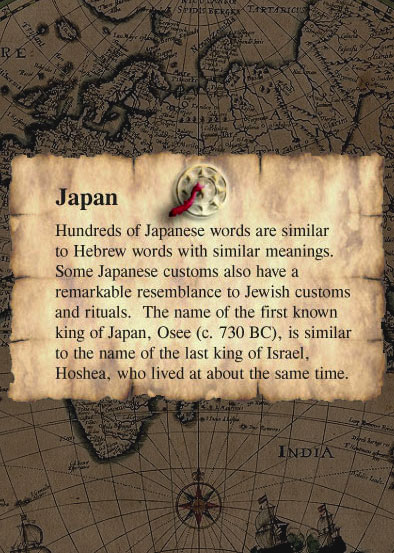 The history of the Ten Tribes starts with ten of the sons of Jacob—Ephraim, Manasseh, Issachar, Zebulun, Asher, Naphtali, Dan, Gad, Reuben, and a portion of the tribe of Levi. Their descendants made up the ten northern tribes of ancient Israel. In the time of the prophet Samuel (11th cent. BC), these ten tribes were united into a single kingdom together with the southern tribes of Judah and Benjamin. This united kingdom was ruled first by Saul and then by David and his son, Solomon. But because of Solomon’s sin in worshiping other gods, God divided the kingdom into two parts. The Ten Tribes he gave to Jeroboam, one of Solomon’s officials (1 Kings 11:29-38). This new, northern kingdom was known as the Kingdom of Israel. The southern tribes of Judah and Benjamin, ruled by the descendants of Solomon, formed the Kingdom of Judah.*

* This southern kingdom included the tribe of Simeon that at an early date had mixed in with Judah and lost its independent identity. The tribe of Levi, which had originally been settled in specially designated Levitical cities in both the north and the south, left the north after the split of the kingdom and resettled in the Kingdom of Judah (Num. 35:2-8, 2 Chron. 11:13-17).

To discourage the Ten Tribes from worshipping in Jerusalem, Jeroboam set up golden calves: one at Dan on his northern border and another at Bethel on his southern border (1 Kings 12:26-33). This compromised form of worship led the Ten Tribes away from obedience to God’s Law and eventually to the worship of the pagan god Baal and other false gods. For two hundred years, God sent prophets to warn them to turn from their wicked ways, but they ignored these warnings. Finally, because of their sin and rejection of their covenant with God, he sent many thousands of the people into exile by the hand of the Assyrians to what is today southern Iraq (2 Kings 17:7-23). Here, in fulfillment of prophecy, they mixed in with the local population and disappeared among the Gentiles, thus becoming the Ten Lost Tribes (Hosea 7:8).

Not all who were of the Ten Tribes, though, went into exile. Some fled south from the Assyrians and joined Judah (the sons of Israel living in Judah; 2 Chron. 30:25, 31:6). Their presence is indicated by the many small villages that suddenly appear in the hill country of Judah at this time. Others remained in northern Israel where they mixed in with immigrants from Assyria to become the Samaritan people (2 Kings 17:24-41, 2 Chron. 34:9,21).

Even among those who went into exile, some maintained their Israelite identity. Some of these later joined the exiles of the southern kingdom of Judah when they returned from their Babylonian exile (Ezra 2:28, Neh. 7:32). The prophetess Anna, for example, who met the baby Jesus in the Temple, was from the tribe of Asher, one of the Ten Tribes (Luke 2:36). Yet others who maintained their Israelite identity were absorbed into the general diaspora (scattering) of the Jewish people in Greek and Roman times. Because of this, not all in the Ten Tribes were lost. Many were absorbed into the Jewish (the Judahite) people. As a result, the blood of all twelve tribes flows in the veins of the Jewish people today.*

* This is an important point against the teaching of Messianic Israel and other Anglo-Israelite groups. They claim that every appearance of the term Israelite in the Bible refers to themselves, and not to the Jewish people. In fact, the terms Jewish and Israeliteare used interchangeably in the New Testament. In Romans, the apostle Paul calls himself and his Jewish kinsmen Israelites even though he is of the tribe of Benjamin, and therefore Jewish (Rom. 9:3,4,6; 11:1). Examples of this kind can be multiplied. The Jewish people in the time of Jesus understood that they, as a people, were descended from all twelve tribes (James 1:1, Acts 26:7).

Yet the Jewish people never forgot those of the Ten Tribes that were lost among the nations. The belief that they would one day be restored (as one stick with Judah in Eze. 37:15-28) is a part of Biblical prophecy, and is believed by modern Orthodox Jews to be one of the signs that will identify the Messiah. As a result, there has been great interest among the Jewish people in the discovery of isolated pockets of descendants of the Ten Tribes and their return to Israel.

One of these groups, known as Mountain Jews, was discovered in the former southern Soviet Republics. When representatives from Israel went to meet them, they traced their departure from Israel in ancient times not to the Babylonian exile, but to the time of the Assyrians. This makes them part of the Ten Tribes. Most of these Mountain Jews have now returned to Israel. Other groups that retain an identity with the Ten Tribes and preserve Jewish customs and practices have been found in Ethiopia (the Falashas), Zimbabwe (the Lemba tribe), Afghanistan and Pakistan (the Pathan tribes), India (Kashmir), Burma (the Menashe tribe), China (the Chiang-Min), and Japan (the Hata).

Yet the fact remains that thousands among the Ten Tribes intermarried with Gentiles and lost their identity as Israelites. In the vast multitude of pagan peoples, they were a tiny minority. Yet genetically speaking, their descendants now include the entire human race.* Does this descent of the Gentile nations from the Ten Tribes have prophetic significance? One of the most interesting prophecies relating to the Ten Tribes was given by Jacob when he pronounced a blessing over Ephraim, ancestor of the largest and most important of the Ten Tribes. Jacob said, his [Ephraim’s] descendants will be the fullness of the nations (Gen. 48:19). This is the only place in the Old Testament that this unusual phrase the fullness of the nations (in Hebrew, melo ha’goyim) appears. Unfortunately, it is often translated a multitude of nations, which hides the true meaning: that Ephraim will be identified with all the Gentile nations of the earth.

* The rapid (exponential) multiplication of ancestral lines through history, combined with the historical interbreeding of human populations, guarantees that fractional descent from the Ten Tribes (as well as from every other human group) is spread across the entire world’s population.

Elsewhere, both Peter and Paul quote Hosea’s prophecy in which the northern kingdom of Israel (the Ten Tribes) is renounced by God and cut off from being his people. But in that same prophecy, a future restoration is promised: In the place that it is said to them, You are not my people, it will be said to them, You are sons of the living God (Hos. 1:10, also Hos. 2:23; Rom. 9:24-25; 1 Peter 2:10). Both apostles apply this prophecy, originally given to the Ten Tribes, to Gentile Christians. They understood that Gentile Christians, by accepting Israel’s Messiah and joining themselves to Israel’s God, fulfill the prophecies that Messiah would gather in the dispersed remnant of Israel (the Ten Tribes).

Because of Acts 15, Gentile believers, though they may be descended from the Lost Tribes, are under no requirement to obey the Law of Moses.* As a result, their unity with Jewish believers in Jesus is a unity based not on the Jewish Law, but on serving and obeying the Jewish Messiah.**

* Other than the exceptions noted by the Council—no idolatry, no immorality, no eating of blood (Acts 15:20,29). Gentile Christians are also required to obey all the commandments of the Law of the Messiah (the New Testament), which repeats all the moral requirements of the Law of Moses, though not its ritual and ceremonial requirements.
** This is exactly the implication of the prophecies in Ezekiel (see below) that the union of Ephraim (the Ten Tribes) and Judah (the Jewish people) would be in King Messiah (Eze. 37:22,24), and on the basis of a new and everlasting covenant (Eze. 37:26). The modern Messianic Israel movement, by contrast, seeks a unity with the Jewish people based on the Law of Moses, which they believe will draw the Jewish people to Jesus. But from the rabbis’ point of view, they cannot fully obey the Law unless they convert to Judaism. This, however, would compromise their faith in Jesus. On the other hand, if they don’t convert, they will never be considered legitimate in the eyes of Rabbinical Judaism. They are seeking an earthly and fleshly restoration with the Jewish people, while the Bible is pointing toward a spiritual restoration by faith in Messiah.

The prophecy of the coming together of Ephraim (the Ten Tribes) and Judah (the Jewish people) as one stick (in Eze. 37:15-23) is therefore a prophecy of the end-time reconciliation of Gentile Christians (the Ten Tribes) and the Jewish people in the Messiah (Eze. 37:22-26; Micah 5:3). This reconciliation, initiated in the time of the apostles, was sidetracked for many centuries by Christianity’s rejection of its Jewish Roots and its conversion into a purely Gentile and often anti-Jewish and anti-Semitic religion. But God is renewing the community of believers in Jesus (Yeshua) through the restoration of Jewish Christianity (Messianic Judaism) and the growing movement among Gentile Christians to reconnect with Christianity’s Jewish roots. But our physical unity (being joined together in the land of Israel, Eze. 36:24) awaits the coming of Messiah, when all Israel will turn in repentance to Jesus (Zech. 12:10-13:1; Matt. 24:30; Rom. 11:26-27), and Gentile Christians will be welcomed into the commonwealth of Israel in which we now stand by faith (Eze. 37:24-25; Zech. 14:16; Eph. 2:12,19).